A Watch Collection With a Sustainable Angle 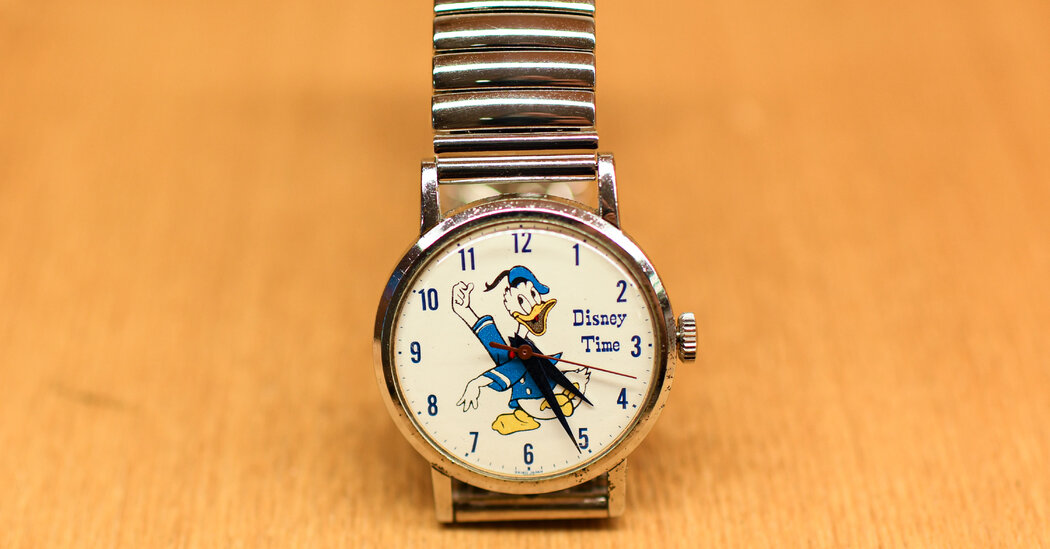 TOKYO — Of the timepieces in his collection — which includes two Patek Philippe enamel-dial Calatrava Ref. 2526 watches and a Van Cleef & Arpels gold mini travel clock, all from the 1950s — Michiteru Ohtani is particularly fond of a Disney edition Seiko mechanical watch from 1962.

When he entered kindergarten, “my grandfather gave it to me so it’s an important memory,” he said. “He was thinking of me when he chose it and gave it to me, and that makes it even more special.” The watch’s white paper dial is labeled Disney Time and bears the cheery image of Donald Duck.

With a bit of care and the occasional help of skilled technicians, Mr. Ohtani, 64, has kept the watch in running order ever since. It is the kind of longevity that is characteristic of mechanical watches — and has prompted many watchmakers to declare that their creations are about as sustainable as products can be.

Mr. Ohtani has the watch serviced at L o’clock, a watch repair and vintage sales shop in the picturesque Gotokuji district, a quiet part of Tokyo filled with old shops and known for a popular Buddhist temple, and near the neighborhood where he grew up and now lives.

“I first asked Seiko, but they refused” because they didn’t have the parts, he said during a recent interview at the shop. “The next person I could trust was Mr. Akiyama, so I came here.”

Naoto Akiyama, the owner of L o’clock, and Mr. Ohtani met about three years ago, when Mr. Ohtani was trying to find someone to service his 1968 Citizen Seven Star. While he sends many of his timepieces to their original manufacturers for work, he trusts Mr. Akiyama, 45, with the rest — and also stops by the shop each week to browse its stock of vintage timepieces.

Over the years Mr. Ohtani, a pharmacist and assistant to the president of the medical research organization Sasaki Foundation, has accumulated 30 watches. Some were gifts and some he purchased. While he has a soft spot for Patek Philippe and Cartier, he said, his collection includes Breguet, Vacheron Constantin and Orient models.

Two of his eight Cartier watches have perpetual warranties, guarantees to repair the watches as long as they exist — something he said Cartier stopped offering in the 1980s. “I really cherish their attitude towards watches, as they expect customers to use them for a long time,” he said.

But, like his experience with the Disney timepiece, sometimes the manufacturers cannot make repairs because the needed parts are not available. A pair of Grand Seikos that Mr. Ohtani owns — one from 1964 and one from 1971 — fall into that category, so Mr. Akiyama now services them. (When he needs parts, he buys the same old model and cannibalizes it, the kind of scrounging operation that a large corporation would not undertake.)

Mr. Ohtani said he felt better buying and owning a product that could be used for a long time, even if it was costly, rather than buying a cheap model that might fail quickly and could not be repaired. “Spending time with things I like enriches my life,” he said, like his car and his bicycle, both purchased in the 1980s.

He included another Patek Philippe Calatrava — a 1956 Type 96 in 18-karat rose gold with a chocolate leather strap — in that group of special things. His wife Hiromi gave it to him when they became engaged, as part of yuino, a traditional Japanese betrothal gift or monetary exchange. “This is the most important watch of my collection,” he said.

Mr. Ohtani said he kept every presentation box, authenticity certificate and warranty, as well as repair and service invoices, to ensure he had the complete documentation for all his timepieces. “Watches and other items that are given to me are very important,” he said, like that Citizen Seven Star, which his parents gave him when he entered junior high, or the Cartier Santos, which they gave him in 1980 when he started college. “I’m just the temporary owner and I want to keep them in good condition in order to hand them down to the next generation.”

Mr. Ohtani usually buys antique watches at secondhand shops like Jack Road in the Nakano district of Tokyo, or in Paris when he travels there. “I don’t want to buy too many of those complicated watches as they’re very expensive to repair,” he said, displaying a Seiko Credor Spring Drive Sonnerie that chimes on the hour, or at three-hour intervals (based on the historic Japanese cycle of daily life), “but it can’t be helped sometimes.”

He bought that watch in 2006, the year it was introduced. “When I see this kind of creation, I need to buy it,” he said. “I feel like the craftsmen who made it are challenging watchmaking. It’s an amazing machine.” With a movement of more than 600 individual parts, the watch was developed at Seiko’s Micro Artist Studio in Shiojiri, in the central Japanese prefecture of Nagano.

Mr. Ohtani said he had the watch serviced every year or two, and each time it costs 600,000 yen ($5,440). “When I buy a watch, I have to keep in mind the overhaul costs,” he said, and sometimes that means “you have to limit your collection.”

Sustainability also requires patience, as Mr. Ohtani found out when he sent the oldest watch of his collection, a 1939 Patek Philippe Chronograph, to the brand’s headquarters in the Plan-les-Ouates section of Geneva for service.

He admitted that he was a bit surprised by the cost. “Not sure when I’ll send it again for an overhaul,” he said. “Maybe not for a while.”

"Every day the RTB industry tracks what you are looking at, no matter how private or sensitive, and it records where you...
Read more
- Advertisement -

As of May 2022, the U.S. is experiencing another uptick in the number of COVID-19 cases. High rates of...
Read more
Load more