At Coach, an Eclectic Paean to New York Cool 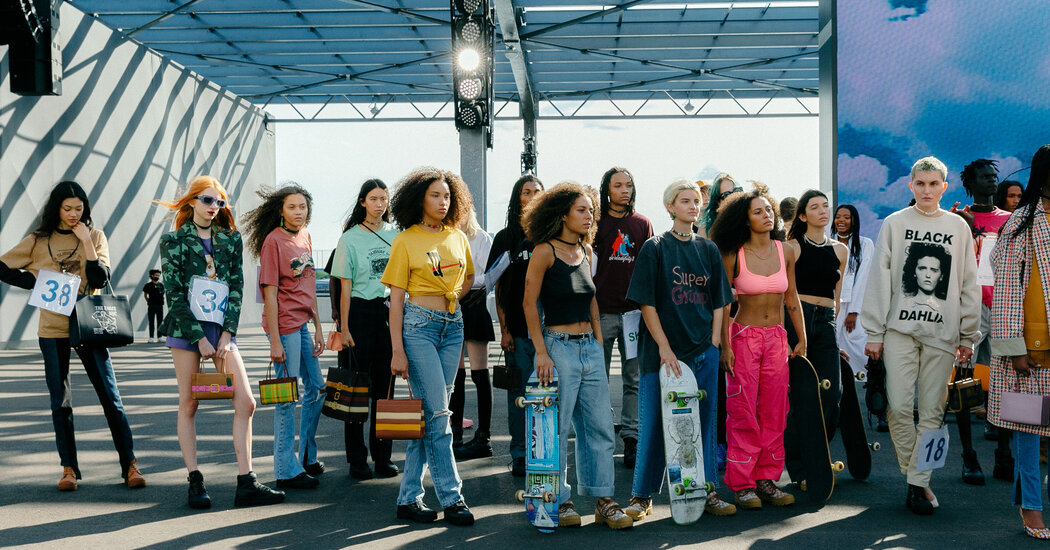 Last Thursday afternoon, Stuart Vevers switched on his laptop camera to accept an Accessories Council Hall of Fame Award for the Rogue, a boxy leather handbag he debuted in 2016, a couple years into his tenure as creative director of Coach. “In the last year and half, I’ve been thinking about the role Coach has played in people’s lives, over so many decades,” Vevers said to a virtual audience from the office on the top floor of his Upper West Side townhouse, one shoeless foot tucked beneath him, out of the frame. “It stands for beautifully made pieces that capture the optimistic spirit of New York, our forever muse.” The moment encapsulated a purposeful set of contrasts — quality craftsmanship and laid-back dress, reverence for the past and forward-looking zeal — scheduled to go on grander display the following evening at Coach’s spring 2022 runway presentation at Hudson River Park’s Pier 76, which promised to mark a triumphant if open-aired return to live viewing.

An hour later, Vevers used the same office and a different Zoom link: Final fittings were underway at Coach’s Hudson Yards headquarters, and clothes clearly intended to spark joy were spread across racks and set on tables. There were flared macaron-pink pants printed with an archival houndstooth lifted from a coat by Bonnie Cashin, Coach’s first designer, whose work Vevers often references; trompe l’oeil shirts printed with faux collars and turnlock pockets, another homage to Cashin, who invented the turnlock closure; and slouchy denim shorts in skater-casual silhouettes.

At the center of the room stood a makeshift photo studio with a giant monitor that showed the faces of stylist Olivier Rizzo, who was tuning in from Antwerp; Keith Warren, Coach’s London-based head of ready-to-wear; and Vevers. (One perk of working from home Vevers is loath to give up: dashing downstairs between calls to cuddle his and his husband’s 14-month-old twins, Vivienne and River.) As models posed in the studio, the three men meted out instructions to a troop of IRL stylists to lower a pocket or pin a tee. A model with crimson hair strode back and forth wearing Cashin-inspired leather pants — “I think they should be shorter,” said Rizzo — and a cotton tee emblazoned with the logo for the Eagle, New York’s most storied leather bar, which closed (before later reopening) in 2000.

Still, it was easy to imagine a teen or 20-something coveting the shirt. “I’ll see young people on the streets of Brooklyn or Tokyo carrying a Coach bag that just happens to be 50 or 60 years old and, in a way, they are reinterpreting our heritage,” said Vevers, 47. This year marks the 80th anniversary of Coach, which got its start in 1941 as a small leather-goods workshop on 34th Street. Vevers came on in 2013, after scaling the ranks of European luxury houses such as Loewe and Louis Vuitton, and has brought not only ready-to-wear, which he launched in the fall of 2014, to the brand but a fascination with American pop culture. “It’s how I connect with the youth culture of today,” he explained. Just then, the building’s fire alarm went off — a false alarm, it turned out, but not before someone quipped “fashion emergency!” and the ensuing laughter helped ease the preshow tension.

The next day, youth culture was unavoidable. Skateboarders plucked from the city streets carved their way across the concrete surface of the pier. Young models slouched in makeup chairs — a kind of high-fashion carpool lane — as Pat McGrath and Guido Palau gave them fresh faces and artfully undone hair. Vevers arrived in a black tee and sneakers and headed for a greenroom set in an outdoor tent to have a cup of tea and see his groomer — a preshow ritual he’s maintained for years (“I like to feel good and polished,” he said). He then made his way outside, past a set of drummers from the Long Island-based Sunrisers Drum and Bugle Corps, who would join the exuberant finale, to give his final notes on choreography. “I just want it to go off as well as possible,” he said, before consulting with McGrath on the particular shade of lipstick as guests started to arrive. “You never really know how it’s all going to come together.”

The day before the show, Vevers accepted the Accessories Council Hall of Fame Award for the Rogue bag (pictured at right) virtually. “So you see that what’s behind me looks so neat and professional, and what’s in front of me is just absolute chaos,” he said of his home office.

Final fittings for the show were also conducted via Zoom, with Vevers calling in and models posing in a makeshift studio. The signature Coach “C” monogram, typically printed on canvas, appears here on a denim jacquard pant. On top, the model wore a trompe l’oeil T-shirt. In a continuation of the hyperlocal merchandise trend, other tees in the collection featured logos for Serendipity 3, Pearl Paint and Zabar’s, among other New York institutions. “A lot of the choices that I made are genuinely personal,” says Vevers. “I live around the corner from Zabar’s.”

Another view of the Coach offices. In the days before the runway show, Vevers — who has also designed for a number of European luxury houses — reflected on his tenure at the brand. “It has a different approach. It’s honest and open and warm and friendly,” he said. “Designing for Coach offered me a chance to speak to more people. And I love that.”

Gathered lightweight mohair skirts brought “a bit of attitude, a bit of toughness,” said Vevers. Overall, though, the styling for the show was simpler than for recent Coach runway shows. “This idea of something more stripped back just felt right,” he said.

The stylist Olivier Rizzo and Keith Warren, Coach’s head of ready-to-wear, also joined the fittings video call. “When I’m collaborating with people who are on Zoom, sometimes it’s better just to all be on the same level,” said Vevers.

In a backstage greenroom, Vevers indulged in the preshow ritual he’s developed over the years: grooming and a cup of tea. The moments before a show are always anxious ones, but at this stage, he says, he’s learned to trust that everyone’s done a good job and that all will go well.

Coach, which is celebrating its 80th anniversary this year, is the first brand to have held a show on Pier 76. A stiff breeze coming off the Hudson kept things cool as Vevers observed final rehearsals.

The giant screen that aired “Coach TV: Public Access,” a series of tongue-in-cheek video vignettes that kicked off the show, also captured the models from a different angle than the viewing benches. The real-world-meets-TV-world effect complemented Vevers’s pop culture-obsessed vision.

One of the “Coach TV” vignettes featured Chaka Khan as a blasé psychic and another cast Megan Thee Stallion as an ’80s-era handbag lover. With its high-spirited mix of nostalgic and contemporary references, the episode set the tone for the live portion that followed.

A prerecorded video of the show’s models emerging from the subway and walking westward to Pier 76 played just before they stormed the actual runway. The show was broadcast live around the world on Coach’s brand channels.

Vevers consulted with Pat McGrath on which berry-stained lipstick a model with fiery orange hair should wear.

Proof of vaccination was required to enter the show, and Covid-19 protocol was in full effect backstage, where masks were required for anyone not eating, drinking or in makeup — though even KN95s did little to keep out the tangy smell of hairspray.

A Visit From Vogue

Anna Wintour visited Vevers backstage to chat about the collection.

Models, dressed in a rainbow of hues, lined up backstage.

Skaters buzzed all over Pier 76 and contributed to the show’s riotous finale. “A lot of the outerwear is very heritage-inspired, but then it’s put together with just the skater shorts, denim and more youthful elements that might present the archive in a fresh light,” Vevers said of the collection.

When the lights flashed a solid white — the prearranged signal — every model, skateboarder and drummer exited at a clip through the backstage doors.

Together, they filled the runway in an effervescent melee.

The show afterparty was held at The Orchard Townhouse, a Chelsea restaurant. Aptly, many of the guests were Zoomer-gen stars. Pictured with Vevers here is the singer Kelsey Lu, left, and the actress Zoe Levin.