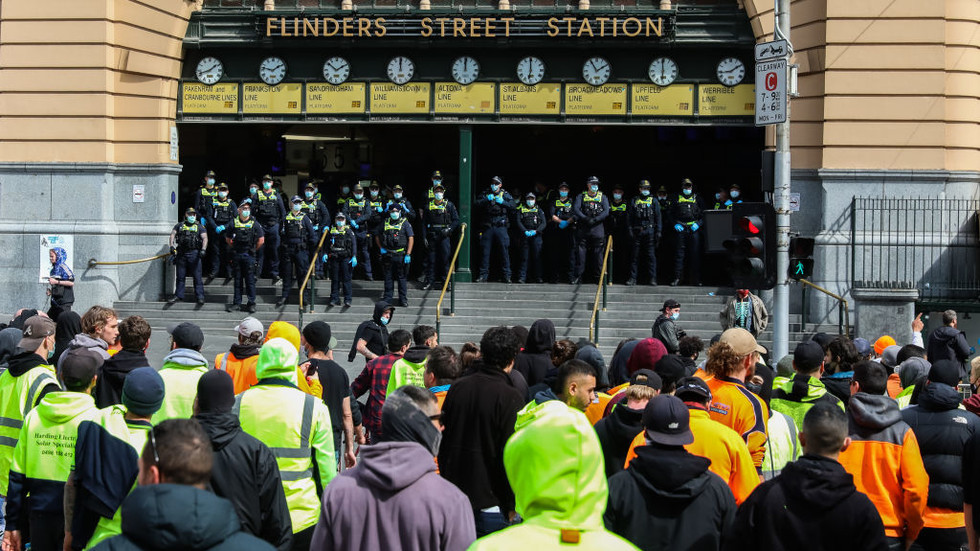 Australian police have launched an investigation into an incident allegedly involving heavy-handed policing after video footage of a violent confrontation in Melbourne was widely shared on social media this week.

The 12-second clip, which began circulating Wednesday night, shows an unidentified man talking to a group of Victoria Police officers at the Flinders Street railway station. Another officer then walks over to them, grabs the man from behind and throws him to the floor.

A loud thud is heard as the man’s head appears to make contact with the floor, shocking other people in the station. The other police officers then move in, with one helping subdue the man.

“This poor guy was calm, he was just talking to the police,” the caption on the posted video said, noting the man went “unconscious” after his “face hit the tiles” and adding that there was “blood and urine everywhere.”

????⚠️WARNING ⚠️????GRAPHIC CONTENT at Flinders St Station When Shane Patton said they won’t hesitate to use force I think this was his vision ???????????? pic.twitter.com/zpdLDa5ttL

According to the woman who posted the clip, the man was “unconscious for a while” and called for “his mum” when he regained consciousness. The woman, who asked to remain anonymous, told the news.com.au outlet that the officer who threw the man down had handcuffed him while he was unconscious.

“We are all very disturbed by this and I’ve been inundated with people worldwide wanting to know if this man is all right,” she said. “We understand the paramedics looked at him but not sure what happened after that.”

The video emerged amid chaotic scenes in Australia’s second-largest city this week as police officers clashed with anti-vaccine and anti-lockdown protesters. The incident was one of a number of videos shared online that apparently show the use of excessive force.

In a statement, Victoria Police said the “exact circumstances” around the incident were “yet to be determined” and added that it was being investigated by the Transit Safety Division and Professional Standards Command. The police also urged any witnesses to contact a helpline.


Chief Commissioner of Victoria Police Shane Patton confirmed to radio station 3AW that an investigation was underway but cautioned against “jumping to any conclusions” about the incident.

“There is always a before and after with these matters, and context, and I think that’s important,” Patton said, adding that he “couldn’t be prouder” of the police who had been “brilliant” when dealing with protesters in what had been a “dynamic, scary and frightening” few days.

However, the majority of social media users condemned the incident as an example of “police brutality” with several commenters scared that the man could have been killed.

Since Monday, demonstrators had been taking to Melbourne streets to vent their frustration at the government’s handling of the pandemic, including its latest move to impose a vaccine mandate on construction workers.


The authorities’ decision to shut down construction sites starting Tuesday to punish operators for defying the mandate added fuel to the fire, and saw Wednesday’s rally spiral into full-blown clashes with police.

Law enforcement deployed tear gas and rubber bullets in an attempt to disperse the protesters, some of which threw bottles and other projectiles. Around 200 people were arrested in the wake of the unrest.

Victoria Premier Daniel Andrews has chalked up the unrest to agitators, arguing that the protest was hijacked by provocateurs who wanted to incite violence. “They’re there to pretend to be protesting,” he claimed on Tuesday, while denouncing the events as “appalling.”