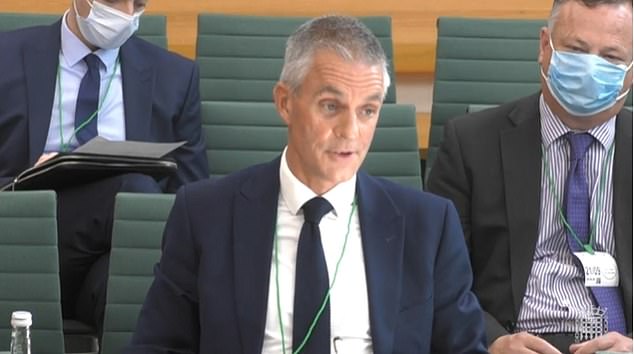 The BBC‘s director general has defended appointing Jess Brammar as head of news channels amid accusations of political bias from Tories.

Tim Davie faced questions from the Digital, Culture, Media and Sport Committee at Westminster today over the hiring of the former Huffington Post editor to run the corporation’s news operation.

The corporation has been accused of creating a six-figure non-job for the left-wing editor, who has been attacked over past criticism of Brexit and support for Black Lives Matter.

But Mr Davie defended Ms Brammar’s appointment and said it was important the BBC ‘hire across the political spectrum’.

He said: ‘We need to hire the best at the BBC and we need to hire across the political spectrum. That is an incredibly important precedent and this affair is dangerous territory for us.

‘Not because of the process but because if people begin doubting our ability to hire people with views into the BBC, and when they get here they leave them at the door – political views.’

He also denied the departure of BBC news chief Fran Unsworth was prompted by the appointment of Ms Brammar.

Tim Davie faced questions today over the hiring of the former Huffington Post editor Jess Brammar to run its news operation, amid accusations of political bias from Tories. 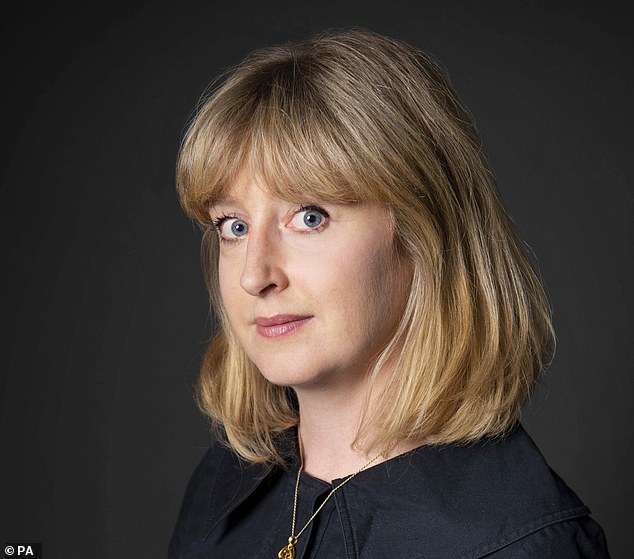 The corporation has been accused of creating a six-figure non-job for Ms Brammar, who has been attacked over past criticism of Brexit and support for Black Lives Matter.

The BBC chief added: ‘Not in the slightest. Nothing to do with the latest incident. This was a planned move. Fran is an exceptional executive, if you look through her record.

‘This is a plan that has got absolutely nothing to do with the Jess Brammar appointment.’

However Mr Davie admitted he was unsure if the corporation had hired anyone to a senior position who had supported Brexit.

Elsewhere Richard Sharp, the chairman of the BBC, denied controversy surrounding the hiring of Ms Brammar.

Mr Sharp defended the hiring process and told the Digital, Culture, Media and Sport Committee such appointments were ‘a matter for the director-general and the executive team’.

Ms Brammar, a former Newsnight journalist, rejoined the BBC after being made redundant as editor-in-chief of HuffPost UK.

She will run a ‘combined team across both BBC TV news channels, providing BBC News around the clock, in the UK and around the world’, according to the job description.

She will also ‘manage and develop the team of presenters, in conjunction with the Editor’.

She made headlines after historic tweets emerged in which she was critical of Brexit and Prime Minister Boris Johnson.

Her deleted tweets included comparing Brexit to a bad comedy, demanding a ‘fight for a properly funded NHS‘ and claiming ‘black Brits’ were ‘considering leaving the UK’ because of racism and the threat of Boris Johnson winning the 2019 general election.

In thousands of deleted posts going back a decade, she also voiced support for Black Lives Matter and described her own ‘ignorance as a white woman’. 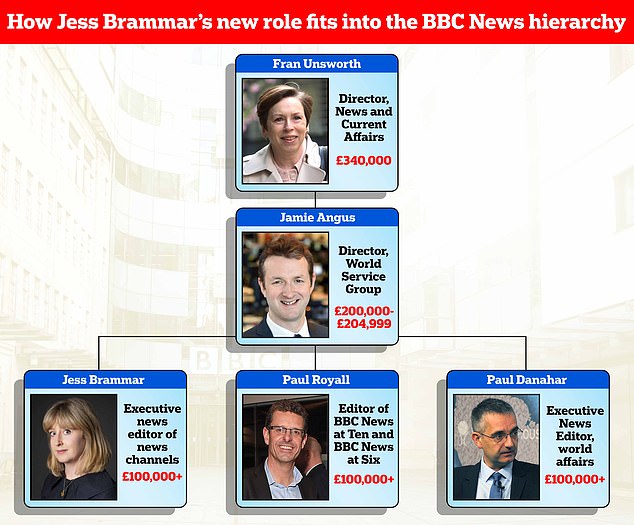 Labour previously called for Theresa May’s former communications director Sir Robbie Gibb to be sacked from the board of the BBC after claims he tried to block her hiring on political grounds.

Discussing the challenge of hiring journalists from across the political spectrum, Mr Davie said: ‘It’s absolutely appropriate to leave (political views) at the door. That is what we do. And, by the way, we have done it pretty well for 99 years.

‘I think it is just tougher now, by the way. The culture wars are raging. I think we have got a real battle on our hands. I walk a tightrope every day on this. But we have got to fight for this. It is not an easy choice.’

BBC chairman Richard Sharp, who appeared alongside Mr Davie and chief operating officer Leigh Tavaziva, said: ‘Staff appointments are a matter for the director-general and the executive team.

‘At the same time, you should be aware in light of some of the things that have been discussed in relation to the Martin Bashir issue, recruiting to senior positions is very important in media organisations such as the BBC, where many issues are involved of reputational importance and issues such as impartiality and balance.’

He added: ‘There are some people who didn’t fully understand the changing nature of the structure of the BBC as a result of the corporate board, who thought it was inappropriate for a non-executive director to communicate to an executive director about any information that may be relevant, in fact the truth is quite the reverse.’

He added: ‘What shouldn’t happen is the non-executive director should make the decision.’

Kevin Brennan MP told Mr Sharp he thought it was ‘unsurprising that some people fear there is something else going on and it’s more serious than a corporate process’.

Mr Sharp said: ‘People are entitled to their fears and concerns, it doesn’t mean they are right.’

He added: ‘If people had matters they thought relevant, they should feel free to communicate them.’

Asked if the episode has ‘tainted’ Ms Brammar’s appointment, because ‘there is a member of the board so vehemently thinking she is unsuitable for the job’, Mr Sharp said Mr Brennan was ‘making a supposition’, adding: ‘The board supports the director-general and the process that has been undertaken.’