Biden and Macron Try to Mend Relations After Diplomatic Feud 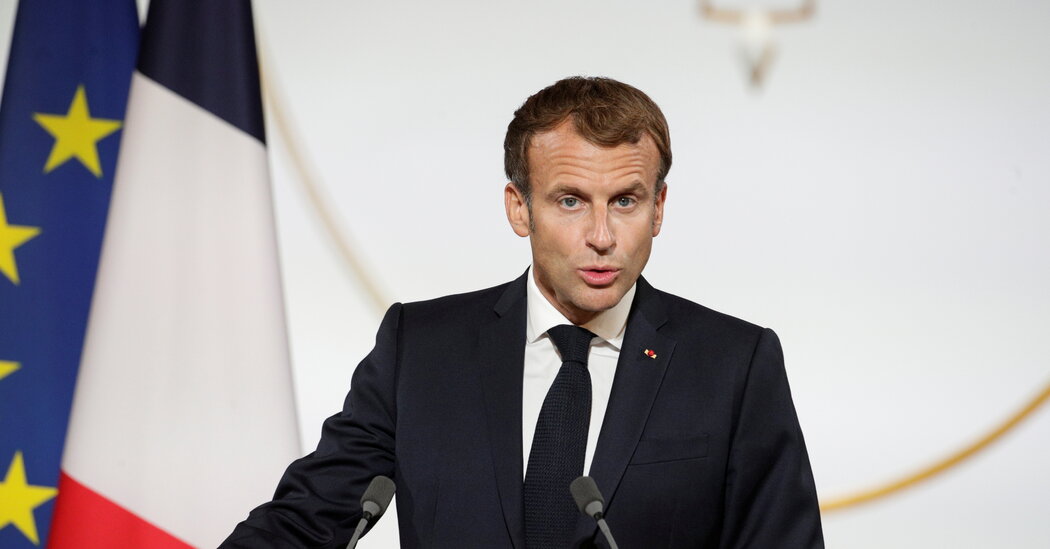 President Biden and President Emmanuel Macron of France took a tentative first step to repairing damaged relations, speaking on Wednesday for the first time since the United States and Britain entered a broad new defense arrangement with Australia that scuttled a $66 billion French project to build attack submarines.

The deal — which the United States, Britain and Australia secretively prepared — led France to declare that its oldest ally had engaged in “lies” and “duplicity” and suggest that the foundations of the NATO alliance had been shaken.

Mr. Biden and Mr. Macron agreed to meet in Europe next month, most likely on the margins of the Group of 20 summit meeting in Italy. White House aides said it was also possible that the leaders would meet separately to underscore their resolve to mend their relationship.

The White House described the conversation on Wednesday as “friendly,” days after Mr. Macron recalled the French ambassador to the United States, a first. Mr. Macron agreed to send the ambassador, Philippe Etienne, back to Washington next week.

While the United States has not apologized for keeping France in the dark, a joint statement said that “the two leaders agreed that the situation would have benefited from open consultations among allies on matters of strategic interest to France and our European partners.”

This, a previous French statement had made clear, was the minimum U.S. expression of regret or contrition sought by Mr. Macron, who was enraged by the maneuvering behind his back over the past several months.

The statement said that “President Biden conveyed his ongoing commitment in that regard,” and that the countries had “decided to open a process of in-depth consultations, aimed at creating the conditions for ensuring confidence and proposing concrete measures toward common objectives.”

While the statement was written in bland diplomatic language, it described the kinds of consultations that are supposed to be routine among NATO allies.

The joint announcement said that Mr. Biden had sought the call, a point reiterated several times in Paris in recent days. For Mr. Macron, who faces a presidential election in April, any suggestion of supplication would have been unacceptable.

The statement referred vaguely to common European defense projects, but those did not appear to be new; the wording seemed to be drawn largely from previous NATO statements.

However, it did say that a “more capable European defense” should be “complementary” to NATO, an interesting choice of words in that the French believe it is essential that a united Europe build up its own defenses. The United States has tended to encourage increased European spending on defense within NATO.

The United States and France have often tangled over the years, most recently in 2003 over the start of the Iraq War — which France opposed — and President Barack Obama’s last-minute decision not to bomb Syria in 2013, when French fighters jets were “hours” from military strikes, as President François Hollande of France put it.

The fights, reflecting France’s prickly determination not to be seen as subservient to a far greater power, have cooled in time. But never before had France withdrawn its ambassador, and never before has the raison d’être of NATO appeared more shaky, as the United States focuses on Asia and European countries wonder about the degree of American commitment to their defense.

If French-American relations appeared to inch from rock bottom, there was no sign of any improvement in France’s damaged relations with Britain. Prime Minister Boris Johnson of Britain, who is visiting the United States, suggested Mr. Macron should “prenez un grip” — bad French for “get a grip.” In defending the agreement that had enraged the French president, Mr. Johnson said, “donnez-moi un break” — “give me a break.”

The French foreign minister, Jean-Yves Le Drian, has not endeared himself to the British government by saying that the country’s “permanent opportunism” was well known to France and that the British were “the fifth wheel of the carriage” in the submarine deal. Relations between the two countries have not recovered from Brexit.

U.S. officials were belatedly searching for special projects they could announce to reaffirm the relationship with France, including new initiatives in the Indo-Pacific. But some senior officials said they were concerned that anything they put together might look like a transparent, face-saving effort, especially when compared with the scope of the Australian, U.S. and British partnership.

The core of the announcement last week was a plan to build nuclear-powered, conventionally armed submarines, to be operated by the Australian navy, that are clearly intended to counter China’s growing influence in the Pacific. The submarines would have a far larger range than the diesel-electric models that France was planning to build under a deal announced in 2019.

But the true import of the new arrangement was far larger: It firmly tied Australia to the Western defense camp in challenging China, after years in which Australian leaders tried to carefully balance their most important defense and intelligence ally in Washington and their biggest customer for natural resources in Beijing. Now, after the Chinese government overplayed its hand with political bullying and major disinformation campaigns in Australia, the country has declared itself a full partner in the Western effort to counter China.

Still, if the move strengthened a new alliance, it weakened an old one: NATO. The decision came as a shock to French leaders, who knew the submarine deal was in trouble but were kept in the dark about the one that replaced it. No decision has been made on the return to Canberra of the French ambassador to Australia, who was also recalled.

The statement before the meeting from the Élysée Palace said that Mr. Macron expected “clarifications on the American decision to keep an ally out of exchanges establishing cooperation in the Indo-Pacific.”

That statement, reflecting Mr. Macron’s anger over what is seen in France as a betrayal, added that the United States should fully recognize “the necessity of reinforcing European sovereignty, as well as the importance of the growing European engagement in their defense and their security.”

The French president did not succeed in securing a reference to “European sovereignty” — a delicate term for the United States as well as several of France’s partners in the European Union — but he did seem to gain U.S. agreement for much of what he sought.

Mr. Macron was particularly offended, Western diplomats said, that Mr. Biden made no mention of the deal when they met in June for another summit meeting. The same day, Mr. Biden also met with Mr. Johnson and Prime Minister Scott Morrison of Australia to put some finishing touches on their deal.

U.S. officials insisted that the president was not seeking to deceive the French, but instead was relying on Australia to break the news to Mr. Macron. They said that it was not up to the United States to disentangle Australia from its contract with France.

Mr. Biden met separately with Mr. Johnson and Mr. Morrison on Tuesday. Their deal has been portrayed in France as “Anglo-Saxon” maneuvering against continental Europe, reflecting a widespread belief that the degree of trust between Anglophone countries can never be matched with a Gallic partner.

After yesterday’s post on what jewelry you wear to work, I started getting ads for this Etsy seller, Janish Jewels — and I’m...
Read more
Technology

The rover will look at some rocks that experts believe could provide the best evidence of past life on the red planet.Perseverance will...
Read more
- Advertisement -

After yesterday’s post on what jewelry you wear to work, I started getting ads for this Etsy seller, Janish Jewels — and I’m...
Read more
Technology

A great date is always in vogue, but there’s something about the summer that makes planning a get-together even more exciting. It’s a...
Read more
Load more