Border Force reveal people smugglers took advantage of three-day heatwave to get 1,542 across 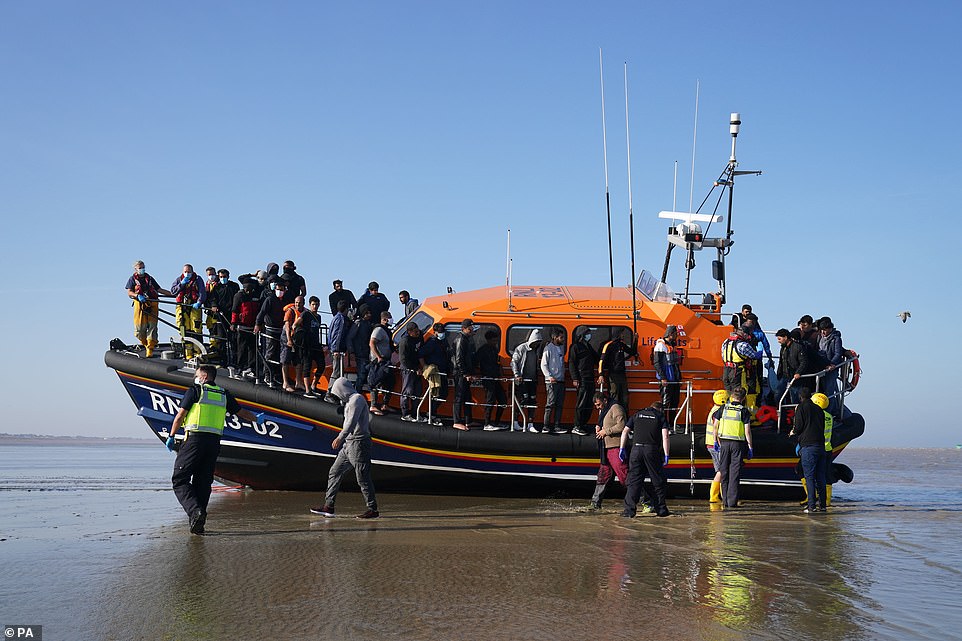 The three-day heatwave saw smugglers spirit 1,542 people across the English Channel from Calais to the UK – pushing this year’s total of intercepted migrants to 14,127.

They included 104 rescued by the RNLI off Eastbourne and make it one of the busiest weeks on record so far.

Home Office official data shows that in a three day window this week the staggering 1,542 people were detained by Border Force officers after making the treacherous 21 mile crossing.

On Monday 785 migrants were picked up in boats and on beaches across the Kent and Sussex coastline in 27 incidents.

The following day 456 people in 17 incidents were detained and on Wednesday the Home Office says 301 people were picked up in nine small boats. In 2020 there were 8,410 migrants detained.

Dan O’Mahoney, Clandestine Channel Threat Commander, said: ‘This unacceptable rise in dangerous crossings is being driven by criminal gangs and a surge in illegal migration across Europe..

‘We’re determined to target the criminals at every level, so far, we have secured nearly 300 arrests, 65 convictions and prevented more than 10,000 migrant attempts.

‘But there is more to do. The Government’s New Plan for Immigration is the only credible way to fix the broken asylum system, breaking the business model of criminal gangs and welcoming people through safe and legal routes.’

In just three days 1,542 people came across the English Channel from Calais to the UK in small boats, including on Tuesday 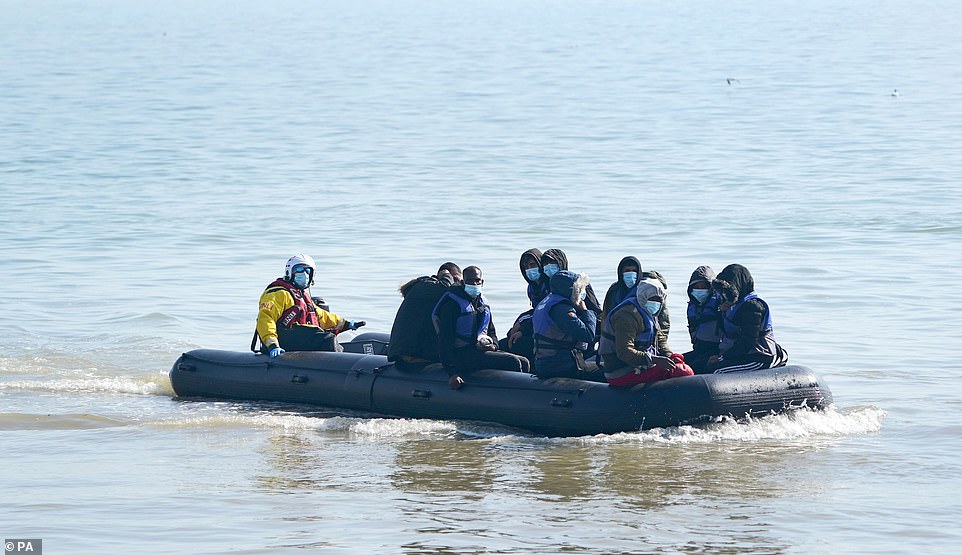 It takes the total of intercepted migrants in just this year so far to 14,127, pictured Tuesday, and has prompted a backlash 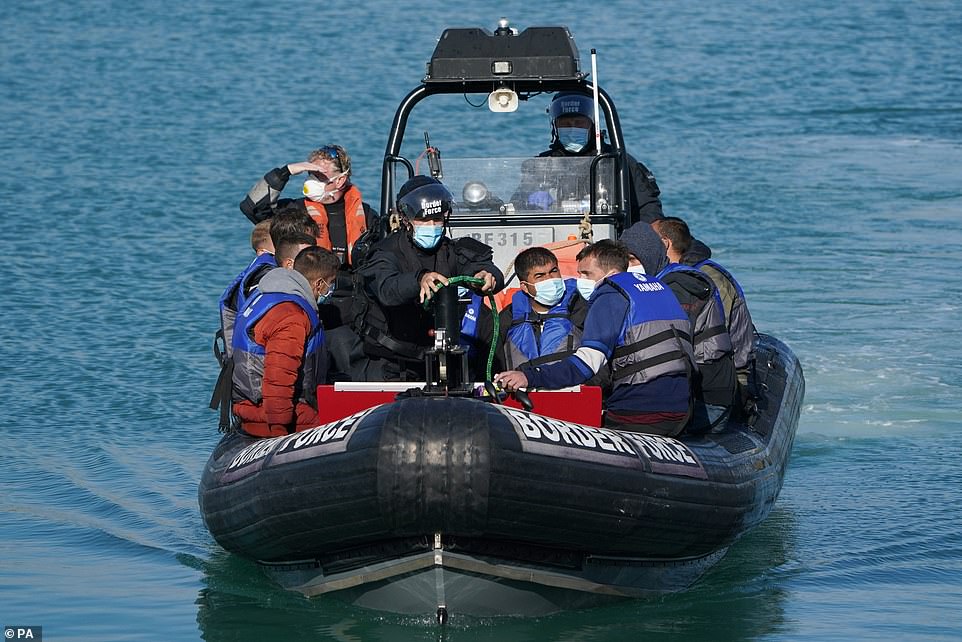 The Border Force vessel Seeker has been patrolling off the Kent Coast this morning.

Natalie Elphicke, MP for Dover and Deal said on Monday: ‘This is simply outrageous.

‘People who are perfectly safe in France brazenly break into Britain day after day. First it was a few, then hundreds and now over a thousand in a single day. The French just waving them through with a cheery Bon Voyage.

‘If the French won’t stop the small boats then we need to. By turning boats back, making returns and taking firm control of our borders.

‘I fully support emergency legislation to do that, if that is needed. This needs a fresh approach urgently.’

But Oliver Dowden said the UK would do nothing to infringe on international law following French criticism of suggestions Home Secretary Priti Patel has sanctioned tactics to turn back migrant boats towards the continent to stop them from making the journey to the UK.

Asked whether he could confirm the tactic had been approved, the Culture Secretary told Sky News: ‘Firstly, in relation to these migrants, it is worth remembering they are coming from a safe country, which is France. 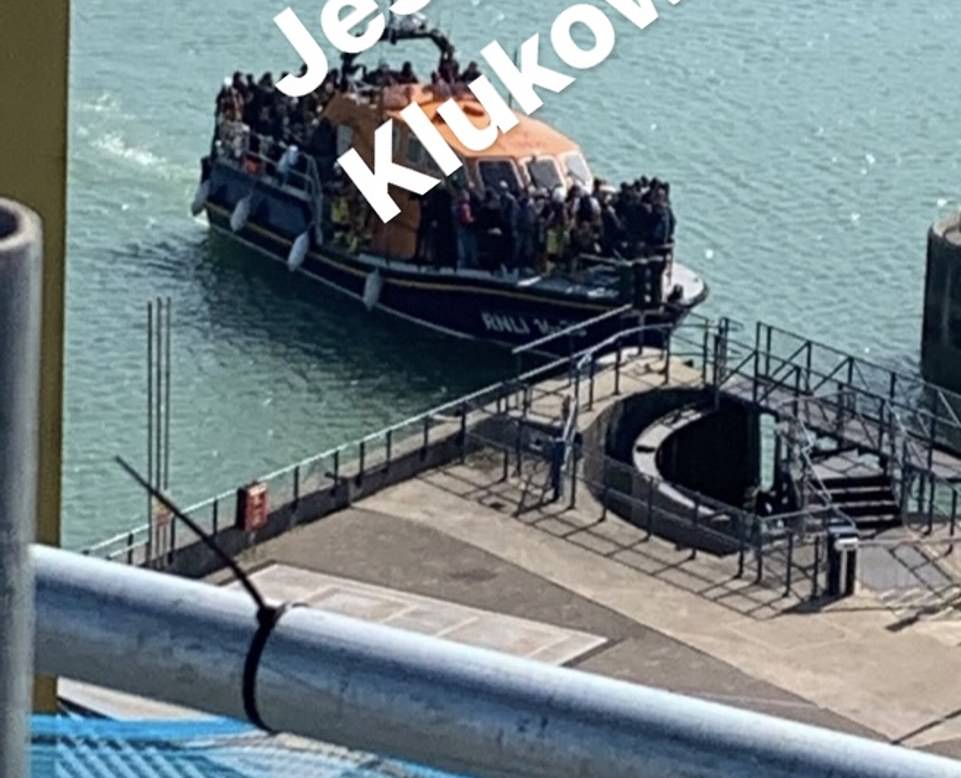 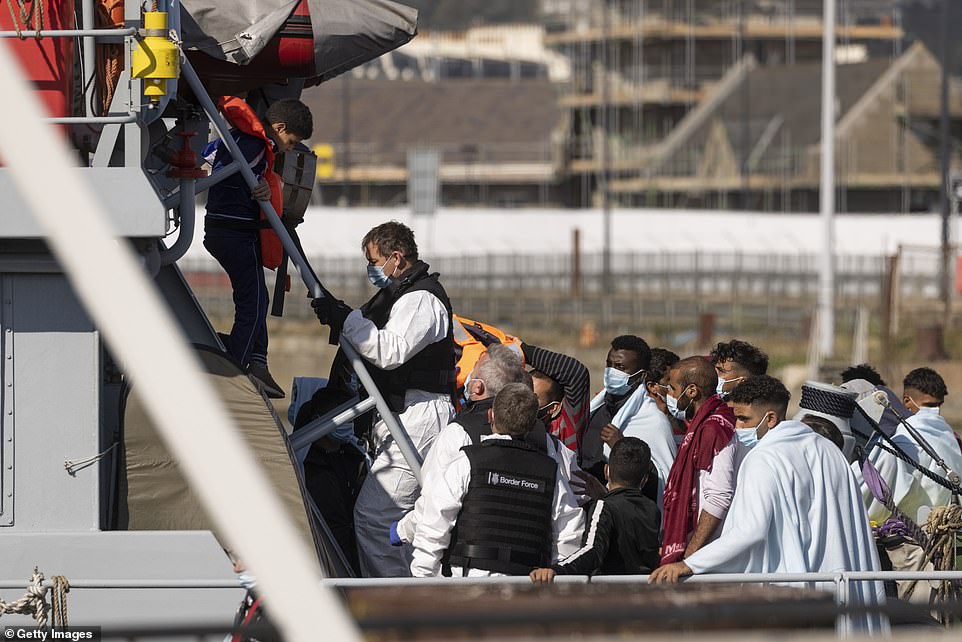 Migrants are brought into Dover docks by Border Force staff on September 9, in Dover, England as the crossings continued 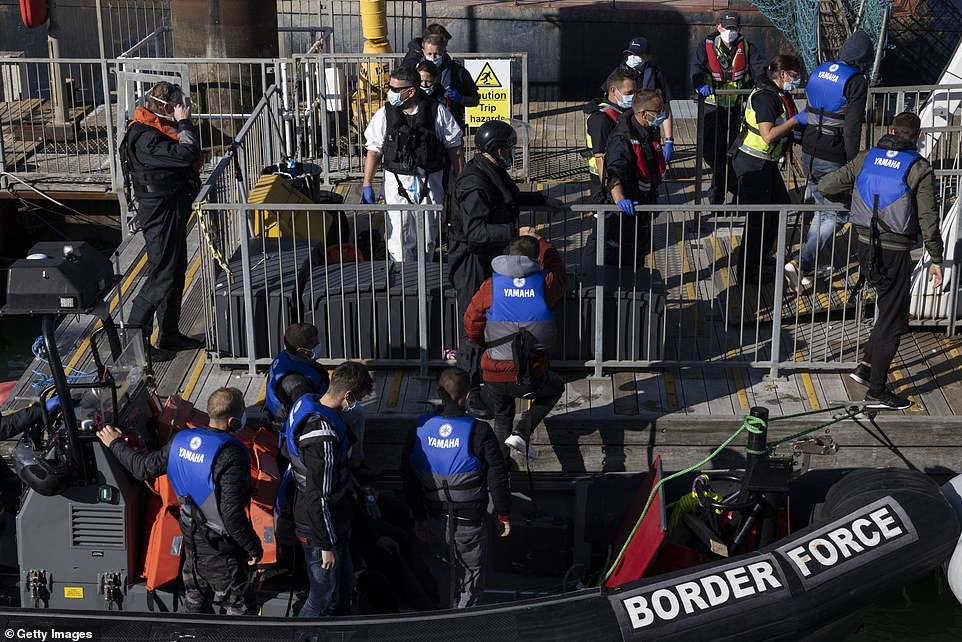 the British government has authorised its Border Force to turn back boats while at sea, in some circumstances

‘This has been a persistent problem for a long period of time. The Home Secretary is rightly exploring every possible avenue to stop that.

‘We have said that that will include looking at turning migrants back, but that will only be done in accordance with international law and clearly the safety of migrants is absolutely paramount.

‘We would not do anything to endanger lives, clearly, but I think the public at large would expect us to be taking measures to prevent people from travelling from the safe country of France to England, and I think it is right to consider all measures.

‘The most important thing about this is the real beneficiaries of this are these criminal gangs who are organising this transport – this is really not in the interest of people who of course have their reasons for wanting to come here.’

A Cabinet minister has confirmed that the UK Government has spoken to counterparts in Paris about how French authorities are using British money that is earmarked for preventing migrants from embarking on trips across the Channel.

Asked if the UK was looking to revise the financial contributions it gives France to help stem the flow of Channel crossings, Culture Secretary Oliver Dowden told LBC radio: ‘That’s precisely the point that the Home Secretary raised with her opposite number about what exactly the French were doing in return for this money.’

But the Mayor of Calais has given a punchy response to the UK’s plans to try and stem the tide.

Natacha Bouchart was on Friday expressing her outrage at a new plan to turn arriving vessels around, and send them back to France.

‘It’s demagogic and irresponsible,’ said Ms Bouchart. ‘Are they going to shoot at the boats and at the passengers in the small boats?’

The conservative politician said the idea – proposed by Home Secretary Priti Patel – was typical of the extremist nature of the Boris Johnson government.

‘It’s not like that that we’re going to have serious relations about the migration problems that we manage,’ said Ms Bouchart.

She told her local newspaper, the Voix du Nord: ‘The British should, for the sake of humanity and to prevent any risk of dying at sea, pick up migrants who are in a hot spot on their territory.’