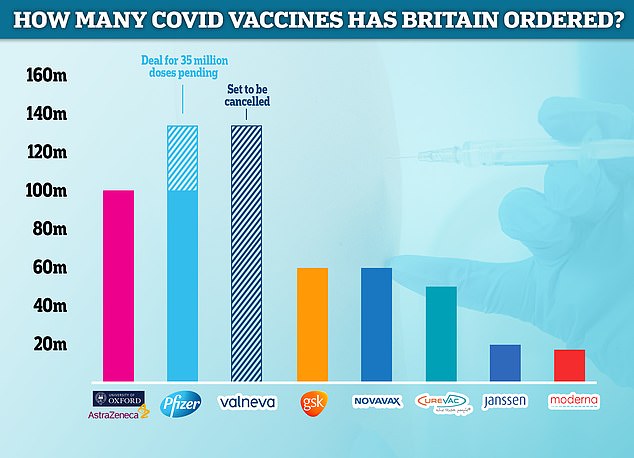 Britain will lend South Korea one million spare doses of the Pfizer Covid vaccine to   bolster the country’s roll-out, it was announced today.

Department of Health bosses today admitted there was no ‘immediate need’ for the extra jabs in the UK.

Officials insisted the deal — which will see South Korea give Britain one million jabs back by the end of the year — would not derail the booster drive or the roll-out to 12 to 15-year-olds.

The deal comes just two weeks after the UK agreed to send four million Pfizer jabs to Australia, in a similar swap agreement.

Both South Korea and Australia have struggled with their inoculation programmes in the face of delays to deliveries and the failure to secure enough jabs early on.

Neither has fully-vaccinated more than 50 per cent of its adults. For comparison, the UK has dished out two doses to almost eight in ten over-16s — or 44million people.

Britain has ordered more than 500million Covid vaccines, enough to double-jab the population four times over.

The UK will have received 100million Pfizer doses by the end of this year, according to supply agreements. Around 40m vaccines made by the US giant and its German partner firm BioNTech have already been dished out. 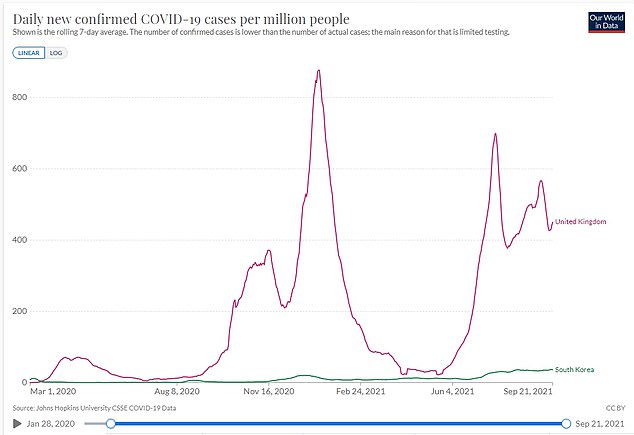 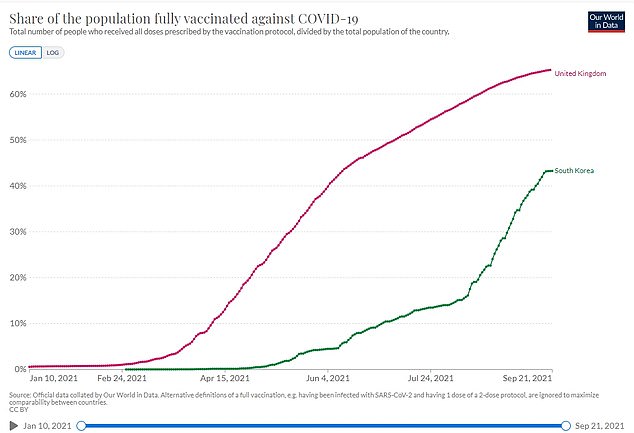 How LLAMAS are helping in the fight against Covid

Tiny antibodies produced by llamas may help in the fight against Covid, research suggests.

And scientists say the virus-fighting proteins could be given to infected people in the form of a nasal spray.

Academics at the Rosalind Franklin Institute in Oxfordshire found that nanobodies – a smaller type of antibody produced by llamas and camels – can effectively target the type of coronavirus that causes Covid.

Short chains of the nanobodies significantly reduced signs of illness when given to infected animals.

The nanobodies, which can be easily mass-produced in a laboratory, could offer a cheaper and easier alternative to human antibodies, scientists say.

Throughout the pandemic, seriously ill patients have received antibodies harvested from survivors to help them fight off the virus.

But they usually need to be administered by a medical injection in hospital.

Under the ‘vaccine swap’ announced today the UK will send a million Pfizer doses to South Korea, with the first shipment set to leave in the coming weeks.

The Asian nation will then return the same number of Pfizer doses later this year.

Health Secretary Sajid Javid said the deal would not have an impact on the UK’s vaccine programme.

‘By working closely with our friends in South Korea, this vaccine swap will maximise their rollout speed without having an impact on the UK’s vaccine programme,’ he said.

‘Separately, we continue to deliver on our commitment to donate 100million doses to nations around the world by June 2022 to ensure as many people across the world are as safe from Covid as possible.’

Newly appointed Foreign Secretary Liz Truss added: ‘The UK is playing a leading role in the global response to the Covid pandemic – donating 100million vaccine doses across the world and have committed £548m to COVAX.

‘The Republic of Korea is a strategic partner for the UK and the sharing of one million vaccines benefits both countries as we help build resistance against Covid and save lives.’

Ms Truss was appointed Foreign Secretary in the cabinet reshuffle last week, taking over from Dominic Raab following criticism of the UK’s withdrawal from Afghanistan.

Britain is set to receive 100million doses of the Pfizer vaccine by the end of this year, and has another 35million on order due in the second half of 2022.

At the height of the inoculation drive in late April the UK was dishing out around 500,000 Covid jabs a day.

But recently the inoculation drive has slowed to a crawl — with fewer than 80,000 doses being administered daily — because most Britons have received the vaccine.

The drive has been expanded to dish out booster shots, but MailOnline analysis showed only around 2million people are currently eligible for them.

The third shots should only be given from six months after the second dose, the Government’s vaccine advisers have said.

Children aged 12 to 15-years-old are also now recommended to get one dose of either the Pfizer or Moderna vaccine.

In South Korea fewer than 50 per cent of adults have got two doses of a vaccine, while in Australia just 36.4 per cent are fully inoculated.

In Australia authorities bet on a home-grown Covid vaccine that failed during clinical trials.

The first shipment of 292,000 Covid vaccines has already been sent to Australia, with more deliveries scheduled.

The country’s Prime Minister Scott Morrison said the first doses were ‘on the tarmac’ when he announced the deal at the start of September.