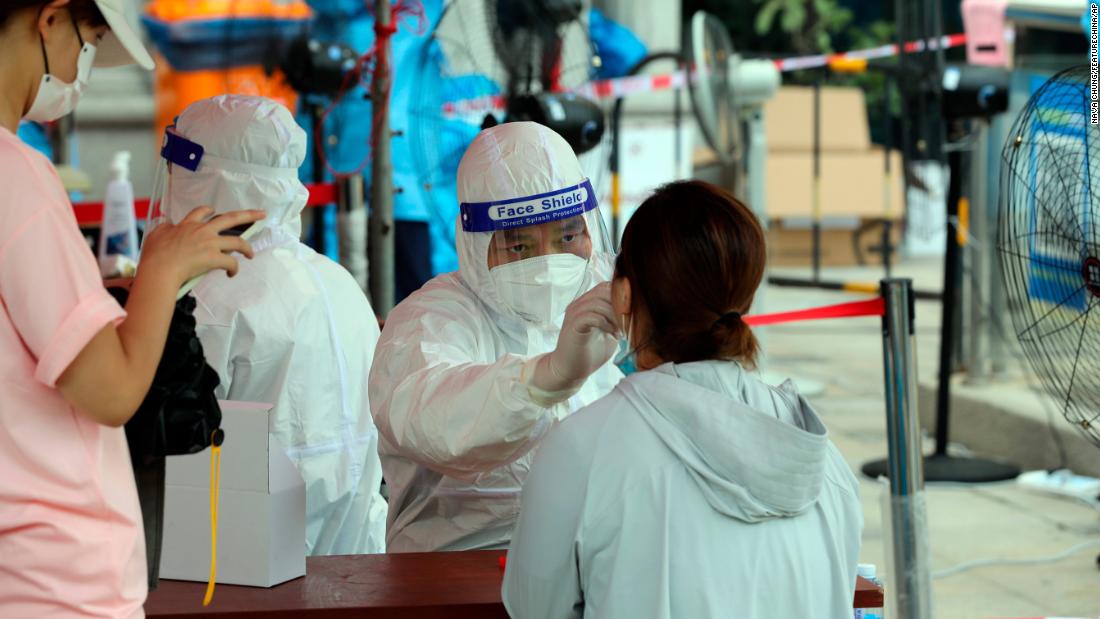 The outbreak, dubbed China’s “first school-centered flare-up” by state media, was originally detected Friday at a elementary school in the city of Putian. It has since spread throughout the province, infecting more than 100 people in three cities.

The National Health Commission (NHC) reported 59 cases in Fujian for Monday, including 24 in Putian and 32 in Xiamen, a major coastal city popular with tourists. On Tuesday, the two cities launched mass Covid testing for all residents.

Putian has about 3 million residents, while Xiamen has a population of 5 million. Both cities have ordered residents not to leave town for non-essential travel. Those with legitimate reasons to leave must produce a negative coronavirus test taken within the past 48 hours. Long-distance coaches departing from the two cities have also been suspended.

On Tuesday, Xiamen imposed targeted lockdowns on residential neighborhoods affected by the outbreak, with residents forbidden from leaving their apartments or compounds. It also shut down libraries, museums, bars, cinemas and gyms, banned large-scale gatherings and canceled events celebrating the Mid-Autumn Festival, a three-day holiday that begins on Sunday.

Similar restrictions have also been imposed in Putian. The city has reported a total of 85 infections, including 30 children under the age of 10, the municipal government said at a news conference Tuesday.

In Xianyou, authorities have placed more than 3,000 direct and secondary contacts of infected cases in quarantine, including large numbers of school children, some of whom have been separated from their parents, according to Wu Haiduan, head of the county government.

“It is a difficult problem when outbreaks occur among children,” Wu said. “If the children can be quarantined independently, we quarantine them independently. If they need parents to accompany by their side, we arrange their parents to stay in a room next to them so they can chat to each other. Of course, they can only chat in the next door.”

As of Tuesday, no related cases have been reported outside of Fujian, but local governments across China are on high alert. The NHC estimates about 30,000 people from Putian, the epicenter of the latest outbreak, had left the province in the two weeks prior to Friday.

An expert team sent by the NHC to Fujian called the outbreak “severe and complicated,” but said it could hopefully be controlled before the National Day holiday next month if containment measures were implemented thoroughly, state broadcaster CCTV reported.

The week-long holiday, known as “Golden Week” and beginning on October 1, is one of the busiest times for travel in China, with hundreds of millions of people expected to pack highways, trains and planes.

Last year, a total of 637 million domestic trips were made during the National Day holiday, the first major holiday since China emerged from its initial coronavirus outbreak. It created 455 billion yuan of tourism revenue — a much-awaited boost to the country’s economic recovery.
On Chinese social media, many users were left wondering whether they would be able to travel during this year’s “Golden Week.” Many people’s summer travel plans were previously disrupted by an earlier Delta outbreak, which first emerged in the eastern province of Jiangsu and swept through half of the country before being contained in late August.

The latest outbreak in Fujian were first detected on pupils at a elementary school in Xianyou. Since then, infections have been found in students at several kindergartens and primary schools.

In Putian, 8 kindergarten students and 28 elementary school students have been infected, according to the government.

Xiamen and Putian have shut down schools and kindergartens and ordered them to conduct classes online.

Experts cited by the state-run Global Times called on the country to expand its Covid-19 vaccination program to cover children between 3 and 12 years old.

China rolled out vaccination for teenagers between 12 and 17 years old earlier this year. As of August 13, more than 60 million doses had been administered in that age group, according to the NHC.

In Putian, the government urged schools to step up efforts to administer second doses of Covid vaccines to 12 to 14 years old, and to complete vaccination for pupils aged between 12 and 17 before Wednesday.

China’s health authorities have approved two domestic vaccines — made by Sinopharm and Sinovac respectively — for emergency use for children aged 3 to 17.

Fujian’s outbreak has highlighted the increasing challenge faced by China’s ambitious zero-Covid strategy, raising questions over its sustainability in the long term.

Experts advising the government have pointed to a father who recently returned from Singapore as the likely source of the outbreak, despite him having been subject to lengthy, draconian quarantine.

The man arrived in Xiamen, the provincial capital of Fujian, on August 4, where he underwent 14 days of compulsory hotel quarantine. He spent another 7 days in centralized quarantine in Xianyou, before returning home for a further week of health monitoring, according to the Putian government.

He had tested negative for the virus nine times during 21 days of quarantine, before testing positive on Friday — 37 days after entering China, according to state media.

Chinese authorities did not reveal when, where or how the man caught the virus, but an incubation period longer than 21 days is highly unusual.

Researchers at the Guangdong Provincial Center for Disease Control and Prevention found that the Delta variant has an average incubation period of 4 days, compared with an average of 6 days for the original strain.

Some have questioned on social media if the man picked up the virus after he returned to Xianyou.