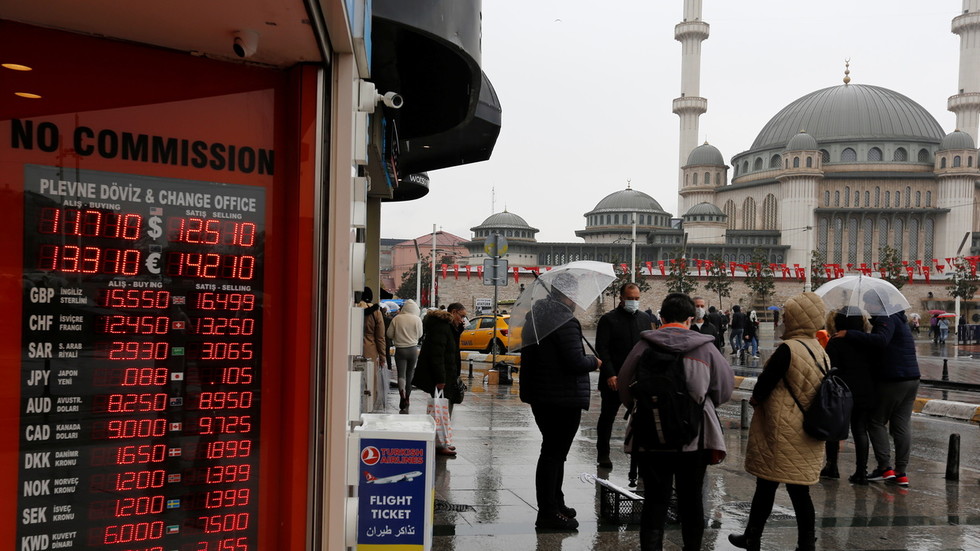 Protesters have taken to the streets of Turkey’s capital, Ankara, as well as the country’s largest city, Istanbul, demanding the resignation of President Recep Tayyip Erdogan and his government over skyrocketing inflation.

On Tuesday evening, protesters marched down the streets of Ankara’s Çankaya neighborhood, where most Turkish government buildings and government institutions are located.

They chanted “istifa” (resign) and the name of Erdogan’s ruling party, the Justice and Development Party (AKP). Many blew whistles and banged pots and pans to make noise.

The protests come amid an escalating currency crisis. The Turkish lira has gone from $0.1 to $0.078 in value just over the past week, in the worst slide since 2018.

Erdogan has defended his government’s monetary policy, saying he will not engage in “the game played by those over the currency, interest and price hikes,” but will proceed with his own economic plan instead.

“We will emerge victorious from this war of economic independence with the help of Allah and our people,” the Turkish president added.

Unrest has since spread to Istanbul, which is ruled by the Republican People’s Party (CHP), Erdogan’s opposition on the national level.

One of the videos shared on social media showed riot police clashing with the protesters in the Kurtuluş neighborhood of Istanbul.

The people who took to the streets in Istanbul Kurtuluş are marching with the slogans of the Government Resign, Erdoğan resignation. Taksim Square was closed with police barriers.1 dollar= 13.00 Turkish liras1 Euro= 14.36 Turkish liras #Hükümetİstifapic.twitter.com/Af2olxBJYV

Istanbul is Turkey’s largest city by far, and has recently seen a series of political clashes between the CHP and the AKP over allegations of corruption and misconduct.