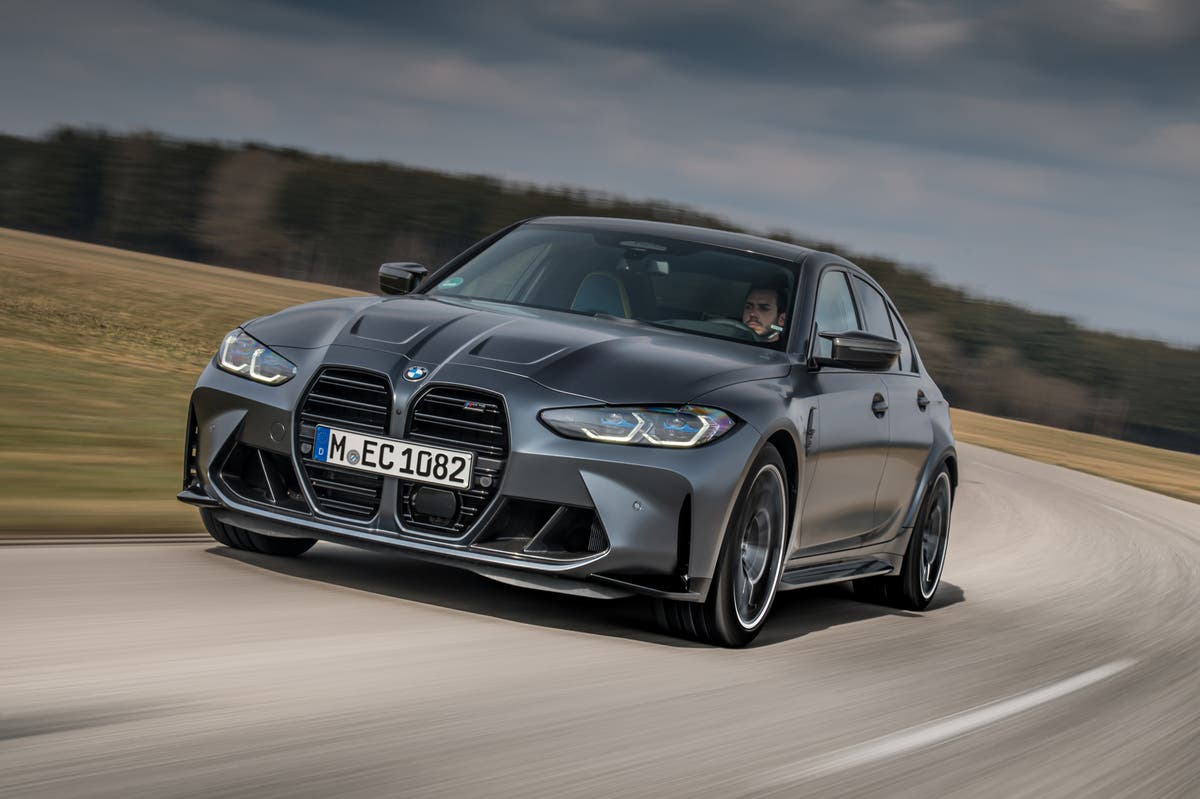 If there’s one sports saloon that stands head and shoulders above the others – also spawning a long line of would-be challengers over the years – it’s BMW’s iconic M3.

Originally launched in 1986, to rave reviews, it’s passed through numerous iterations and ‘looks’ – with the latest, the sixth generation, out this year.

It’s still powered by a powerful twin-turbo straight-six-cylinder engine, it’s still rear-wheel-drive (although there’s a four-wheel-drive option) but there are also some important changes on board too.

The first is that there’s an eight-speed automatic gearbox, replacing the seven-speed twin-clutch setup, while the 3-litre engine has been extensively reworked. There are larger twin turbos and a new 3D-printed cylinder head, helping produce an extra 60bhp over the previous model, and an extra 74lbs of torque.

This has boosted power above 500bhp for the first time, to 503 bhp, while there are 650 Nm of torque – enough to propel this lithe, taut-feeling, highly enjoyable super-fast saloon from 0-62 mph in just 3.9 seconds and on to a top speed limited to 155mph.

Other changes include an improved seating position over the previous model, not least if you order the extremely body-hugging (electrically adjustable) front sports seats, that come with the £6,750 M Carbon pack, while the body has been strengthened for extra rigidity, to deliver even better handling.

The new BMW M3 … a useful, all-round car, especially for one so fast

The new M3 Competition (the only variant on sale in the UK) is also slightly bigger; 120mm longer (resulting in more passenger legroom) and 30mm wider. The looks have also changed – controversially, in some quarters. There’s now a great, big, gaping front grille – kidney-shaped of course as ever – giving the new M3 a hungrier look. Not everyone likes it, but it gives the M3 a huge extra dollop of personality – as though it needs it. Overall, the new M3 is visually impressive; dynamic, but not too in-your-face.

On the road, the changes add up to a car even more entertaining, even more impressive, even more able than its predecessor.

Response from that engine – coupled with the super-slick, almost intuitive 8-speed auto gearbox – is instantaneous, best described as blistering. It sounds sonorously impressive too, and makes for surefooted, safe overtaking on winding country roads.

Winding country roads are in fact where this car is most in its element (its responsive performance feels wasted on a boring old motorway) as handling is this car’s undoubted forte, and reason for being.

Levels of grip are phenomenal, and this can be exploited with precision thanks to beautifully judged steering, further making the M3 come alive.

There are numerous settings to customise the driving experience, pleasing those who also like to enjoy track days. Fortunately, though, when you do come back down to earth and have to trundle along the motorway (or around town) all is calm again, as the M3 is a highly civilised machine when you want it to be.

The M3 is perfectly docile in traffic, and easy to see out of too, with generous glazing, and well-sited pillars.

It’s a useful, all-round car, especially for one so fast. There’s a generous boot – although the opening, as with most saloons, is on the tight side – and the cabin is roomy. On a long journey – I drove to Yorkshire and back from south London, over two days for a motorcycle track day – it’s super-comfortable and, despite its evident performance, surprisingly relaxing.

The cabin is a nice place to be, with very high quality materials, nicely laid-out controls, big, clear screens for the dash display and infotainment, a great, ear-pleasing sound system, even (buried in the computer) driver ‘aids’ I didn’t really have time to grapple with, including a driving analysis coach, lap timer (you could also use it to find how long you queued for petrol) and, apparently, a drift analyser, to rate your skids….. Hopefully only on those track days.

The new M3 is an exciting, scintillating car that has moved this iconic saloon on yet again in subtle, well-planned leaps and bounds, bating the competition with tough new benchmarks they will have to reach.