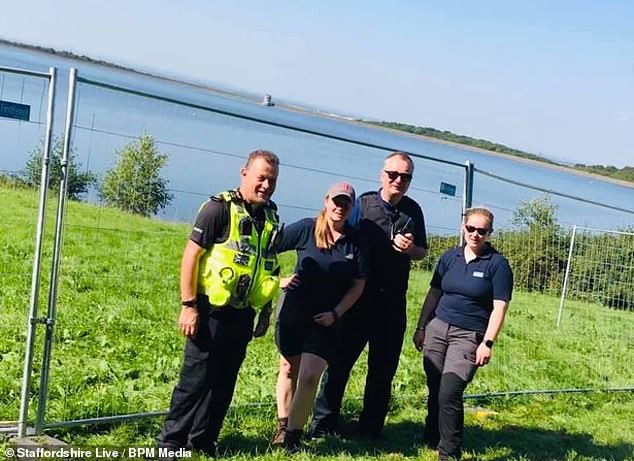 Derbyshire police branded a newlywed couple ‘bridezilla and groomzilla’ as they shamed them online for wanting to take wedding photos at a fenced-off beauty spot.

The killjoy cops – from the force that stalked hillwalkers with drones during lockdown and dyed a lake black to stop people photographing it – revelled in blasting the happy couple.

The unnamed pair and their official photographer had bypassed a 6ft fence erected at the picturesque Foremark Water reservoir near Repton to stop people swimming there during the hot summer months.

Rather than risking their lives in the dangerous depths, the couple, still in their wedding outfits, were planning to pose on the banks and be captured with the blue waters as a backdrop.

But that proved too much for the Melbourne Police Safer Neighbourhoods Team, who blasted them for inching too close to what the officers branded the ‘toxic’ waters, despite them providing the Leicester area with its household supply.

After apprehending the couple on their happy day, the force revelled in stopping the ‘bridezilla and groomzilla’ on social media 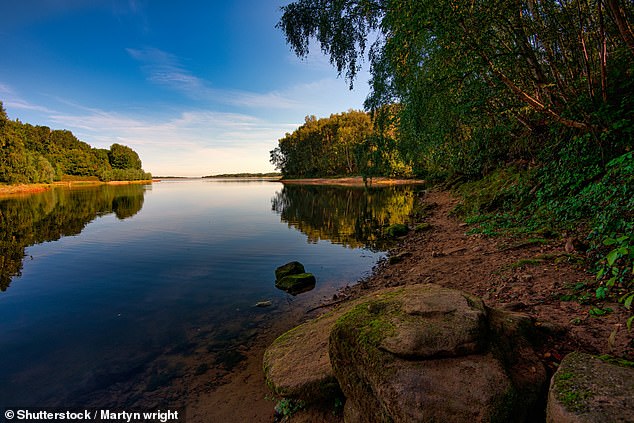 Do you know the bride and groom?

‘To the bride who scaled a 6-foot metal fence in a wedding dress with her groom in toe [sic] for a photography session on the reservoir’s shoreline – what were you thinking?

‘With no respect for the newly-constructed safety barriers, these newlyweds, along with a professional photographer, clambered over a restricted enclosure and descended to a sandy area to pose for some matrimonial snaps.

‘For the avoidance of doubt, Foremark Water is not the set of a Maldives wedding backdrop – it is a working reservoir and the barriers are there for a reason.

‘Your Safer Neighbourhood Team has been working with Derbyshire Fire and Rescue Service and Severn Trent Water rangers to teach people about the dangers of going near the toxic waters at the location.’

The force added that they would not be sending the couple a wedding present, except ‘maybe a Commuity [sic] protection warning notice not to return for 12 months so no anniversary meeting’. 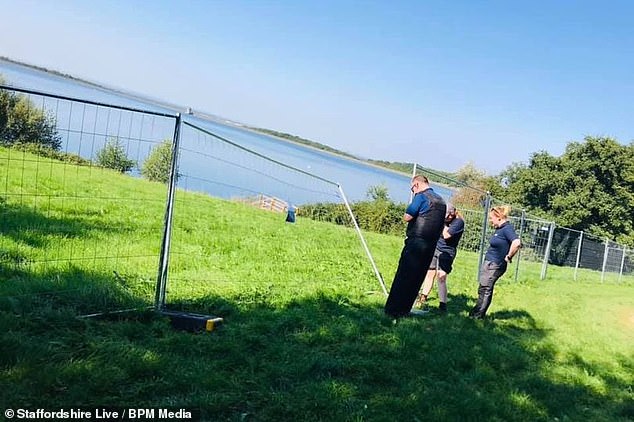 The fence, which was erected this year after warnings not to enter the reservoir were ignored, was recently damaged 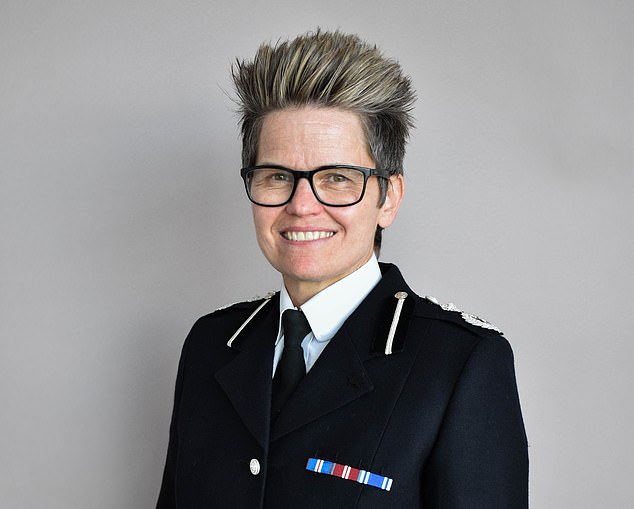 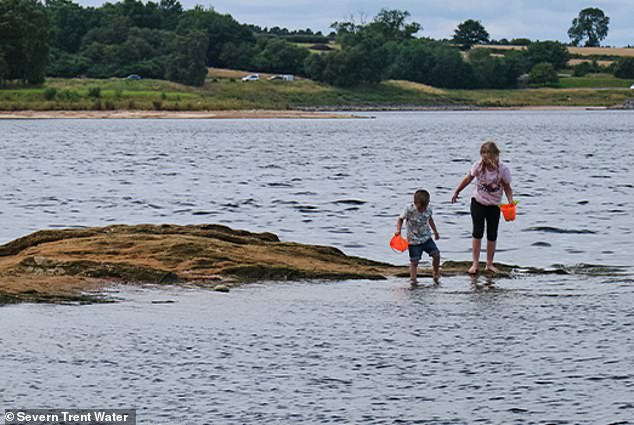 The Facebook post suggested the wedding party were seen at the reservoir earlier in the summer, and officers were reporting it now to deter similar activity during this week’s heatwave.

‘For the avoidance of any doubt, there is a zero tolerance around antisocial behaviour at any of our local beauty spots,’ police continued.

Police said the reservoir has been plagued with locals ignoring signs not to swim in the freezing water, which has dangerous undercurrents.

Youths have also broken through the new fences to hold parties on the restricted beach area.

The fence, which stretches around two miles, was erected for the first time this year after repeated warnings were ignored.

The 230-acre Foremark Water reservoir is home to the Burton Sailing Club and describes itself as a popular fishing spot surrounded by walking trails and woodland. Its website shows a schoolchild paddling in the shallows.

The action against the wedding party comes after Derbyshire Police, whose chief constable is Rachel Swann, prompted fury with their draconian enforcement of lockdown rules.

Officers took the extraordinary steps in March last year of stalking dog walkers and ramblers with drones through the Peak District. 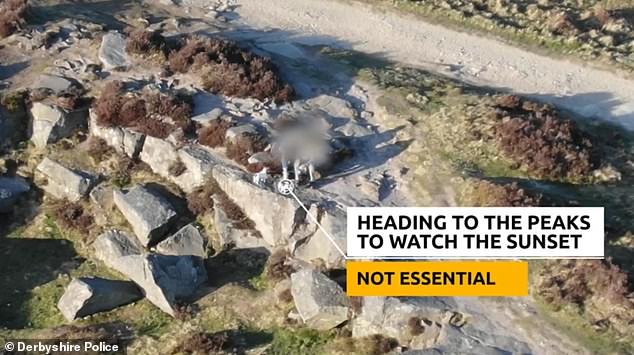 Using the unmanned aircraft they also gathered number plates from parked cars and traced their owners to their homes in Sheffield saying: ‘Walking your dog in the Peak District: Not essential.’

At the time, the Government allowed people to leave home for one form of exercise a day.

Meanwhile two women who were fined £200 for driving seven miles to go for a walk at the same Foremark Reservoir during lockdown had their cautions rescinded after a backlash.

Jessica Allen and Eliza Moore, both 27, were slapped with £200 penalties for travelling the ten minute journey to Foremark Reservoir in Derbyshire in January.

The pair told how they were approached by several officers before being ‘read their rights’ and told the cups of tea they were carrying counted as a picnic.

Derbyshire Police originally defended the decision to fine the women for breaching Covid rules and said driving for exercise was ‘not in the spirit’ of lockdown. 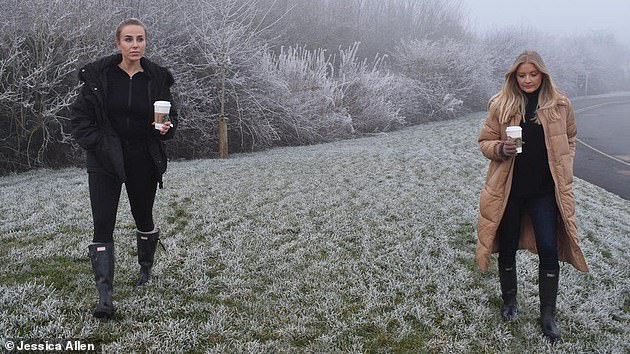 Friends Jessica Allen and Eliza Moore, pictured, both 27, who were each fined £200 by police for driving 10mins for a walk at the local reservoir, had their fines cancelled following backlash

Jessica later revealed they had received separate calls from the force who apologised to them both and informed them their fines will be scrapped.

The force also dumped black dye into a picturesque blue lagoon in an effort to stop people gathering at the beauty spot.

Buxton safer neighbourhood policing team said at the time: ‘No doubt this is due to the picturesque location and the lovely weather (for once) in Buxton. However, the location is dangerous and this type of gathering is in contravention of the current instruction of the UK Government.

‘With this in mind, we have attended the location this morning and used water dye to make the water look less appealing.’

The post drew ire from nearby residents who accused the local police force of using an over-aggressive strategy in the pandemic. 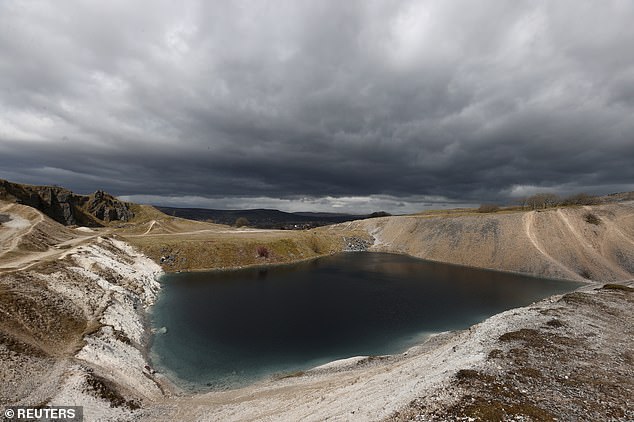 The blue lagoon at Harpur Hill, Buxton, turned a miserable black after police dropped dye into it to stop Instagrammers 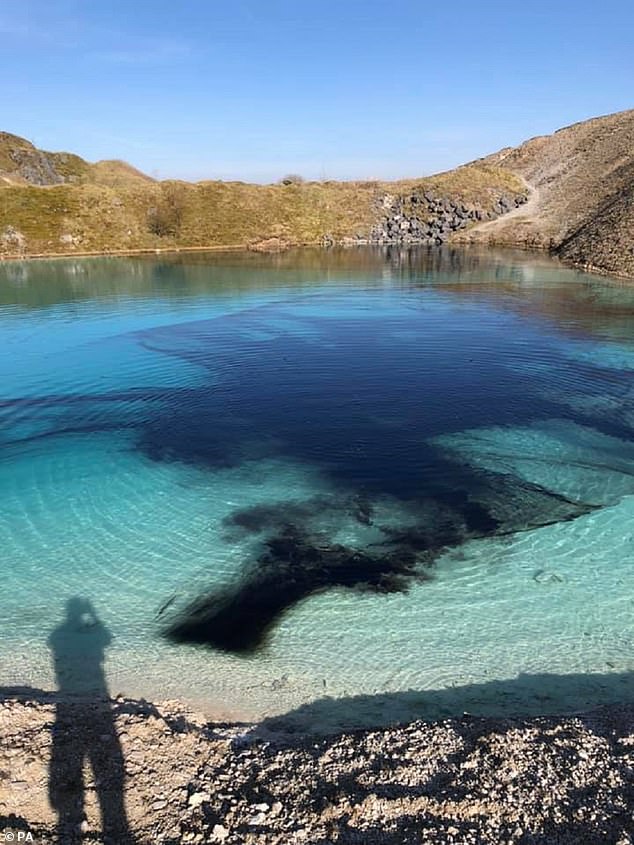 Police officers in Derbyshire put black dye into the blue lagoon in Hupur Hill, Buxton in order to deter visitors to the area

Local resident Alex John Desmond wrote on Facebook: ‘This is a joke, the way this force is acting is not representative of policing by consent which is the way the UK is meant to be governed. You should be ashamed of yourselves. You have taken something beautiful and damaged it.’

He added that the force was promoting a culture of ‘shaming’ individuals found outside, claiming that he was shouted at his first trip since lockdown began.

After the wedding photography incident, officers said they will be carrying out increased patrols at Foremark Reservoir.

They said during the last heatwave in June, there were scenes similar to TV show Benidorm after ‘police were required to respond to a series of shameful acts’.

Officers described it as ‘several days of shame’.

They added: ‘[The] Safer Neighbourhood Team will always try to engage and explain. We want you all to enjoy our bueatiful [sic] Swadlincote.

‘To the few that spoil it for the majority we will take positive action.

They ended the post ‘Enjoy the weather and stay safe’ followed by two thumbs-up emojis, and the hashtag #brideandgroomzilla.