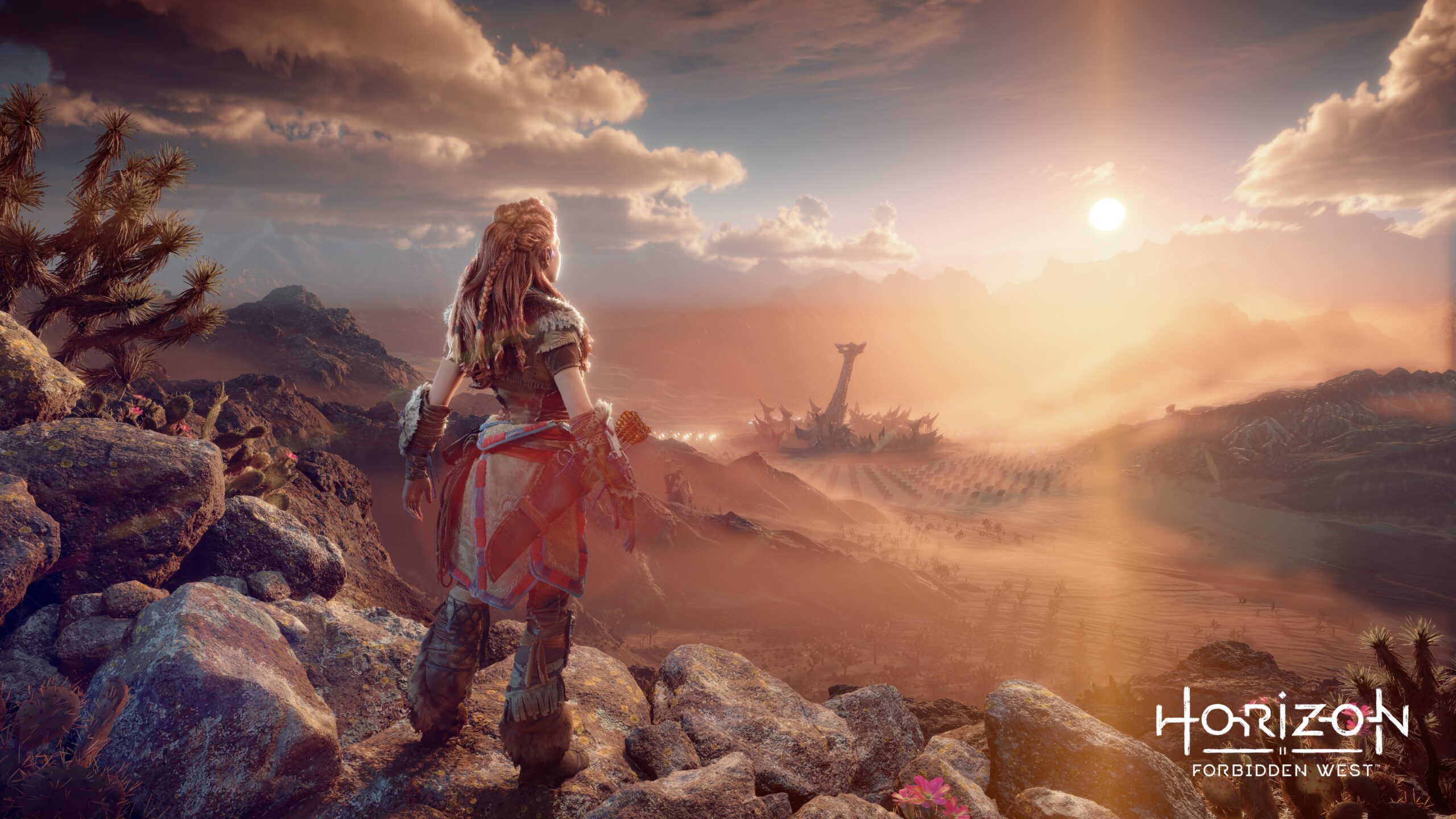 Since the launch of Horizon Zero Dawn in 2017, Aloy has lived in the hearts of our players, and her story of survival, self-discovery, and sacrifice resonated with many. That story is set to continue in the upcoming sequel, Horizon Forbidden West, which takes place six months after the events of Horizon Zero Dawn. Aloy has travelled west to investigate a mysterious and deadly blight. In these uncharted lands, she will meet strange new tribes and encounter ever more deadly machines. Together with old friends and new companions, she must brave this new frontier to find the answers she needs to save life on Earth.

Spoiler Alert: Please note this article contains some spoilers for Horizon Zero Dawn and its storyline.

Aloy’s story, woven from love and loss, makes for a very compelling adventure. People from all over the world have shared with us the impact Horizon Zero Dawn has had on them, and they want more. After revealing Horizon Forbidden West’s gameplay trailer late May, fans were ecstatic to see Aloy again, fighting against machines and raiders, and even reuniting with her old friend Erend.

From outcast to heroic Machine hunter

Guerrilla’s Narrative Director Ben McCaw understands these reactions well. “In Horizon Zero Dawn, Aloy goes from being the least important person in the world – a humble outcast – to the most important. Not only does she become the greatest machine hunter in the land, she discovers that she is the key to understanding Earth’s past and saving its future. Along the way, she gathers key allies to her side, like Varl, a kind Nora hunter who lost his sister in the Proving; Erend, a strong but sensitive Oseram Vanguard; and the Carja Sun-King Avad, an enlightened ruler trying to rescue his people from their bloody past.

‘But Horizon Zero Dawn ends with Aloy’s job only half-finished,” Ben continues. “One threat has been vanquished, but another looms in the form of a strange red blight that’s strangling the land. So in the six months between games, she has been on a mission to discover how to stop this insidious infection. Fans can get a glimpse of her journey in the five-issue Sunhawk collection from Titan Comics. This mission has been tough. She’s had to travel fast and leave a lot of her gear behind. Even so, she has pursued the mission with the same determination, strength, and drive that she showed in the first game. In that sense, she hasn’t changed a bit.”

A hero, a hunter, an explorer… Aloy carries a lot on her shoulders as she continues to face challenges and dangers in these lands. From a narrative perspective, it was important to convey Aloy’s strength and emotional intelligence, and to provide her with lessons and experiences throughout the game to develop further as a real and relatable protagonist.

“Born and raised as an outcast, Aloy has a unique perspective on the world,” explains Ben. “She is deeply compassionate towards those who suffer, and highly driven to punish powerful oppressors. Although she has made many friends during her adventures, she still feels like an outsider, and the truth is, she has no real home. These aspects of her character will be explored in depth as she ventures into the mysterious frontier of the Forbidden West.

‘This goes for the story as well. It starts with the same Aloy that players fell in love with during Horizon Zero Dawn. But we’ve added new tribes, new companions, and new complications, all of which will force Aloy to change. We don’t want to spoil how, but there are some big surprises along the way! We have no doubt that players will enjoy watching her evolution.” 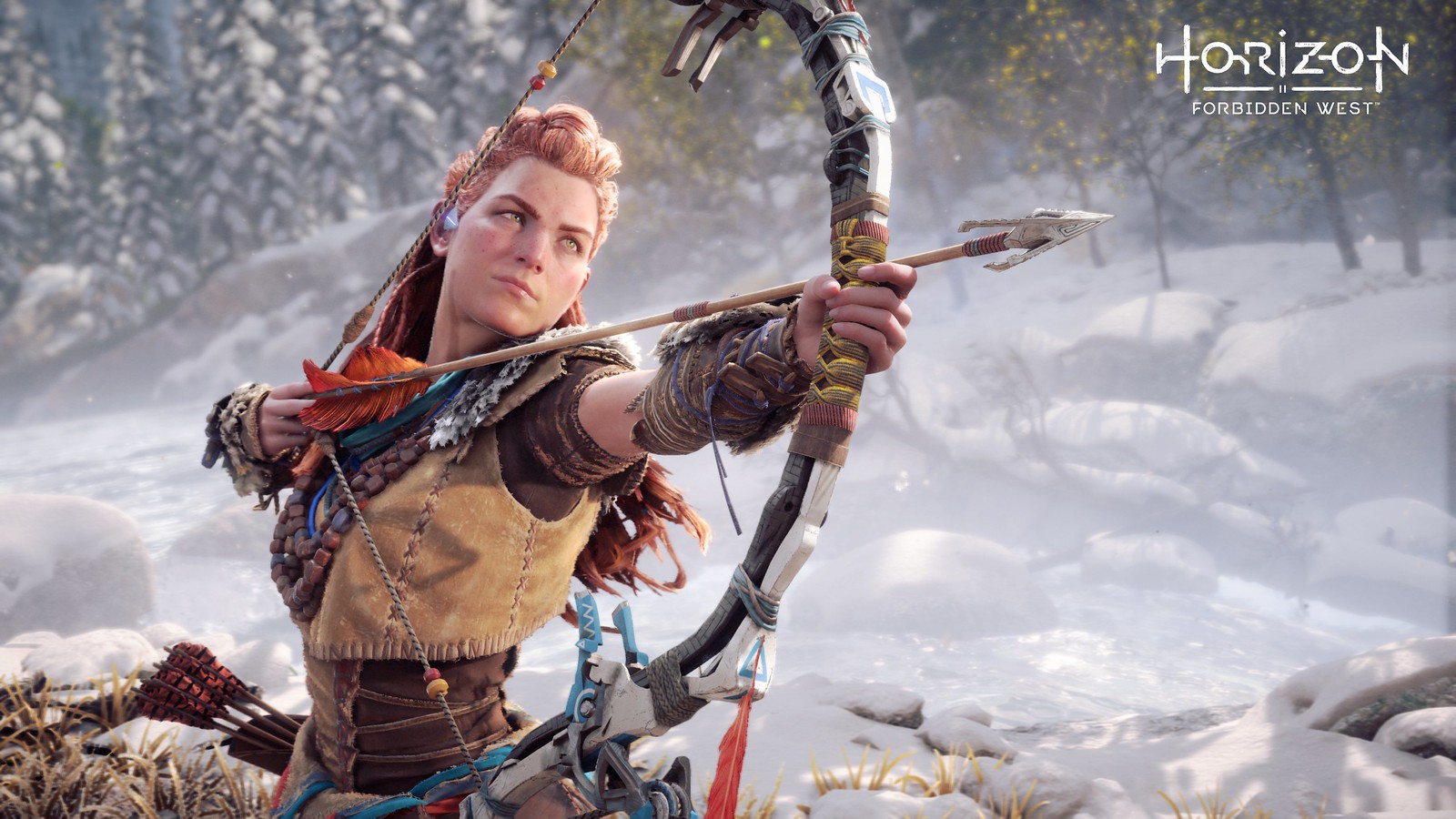 Horizon Forbidden West doesn’t just show an evolution of Aloy’s character, but also offers more freedom in the way she moves through and experiences the world. “In Horizon Forbidden West, we wanted to keep and expand everything that made Aloy such a great and engaging character, but also add much more. She’s still the same nimble and accurate machine hunter, but we’ve added tons of depth to the combat system. It’s still exciting to explore the world with her, yet we’ve made traversal more varied with tools like the Pullcaster and Shieldwing, both of which were on display in our gameplay trailer,” says Ben.

Aloy’s transformation throughout her journey is not only done through the narrative team’s brilliant writing; it’s a collaborative effort between various teams at Guerrilla, from concept art to animation to audio and more.

Ben agrees. “Multiple teams have invested countless hours in her every aspect: her combat moves, her animations, her gear, her hair, and her dialogue. Not to mention Ashly Burch’s inspired voice performance. All of this effort makes Aloy feel real. It also makes her a great fit for all kinds of players: those who want to fight, to explore, to engage with tribes and NPCs, or simply to just take in her presence in a beautiful world. So many people work hard to make all this possible.”

One of these people is Bastien Ramisse, Lead Character Artist at Guerrilla who’s been heavily involved in Aloy’s character since day one.

“Bringing a character to life is always an exciting process,” he starts. “From a creative perspective, we often experiment with multiple design sketches and proposals. This is also when we start discussing how to develop and build a better understanding of the character and its subtleties.’ 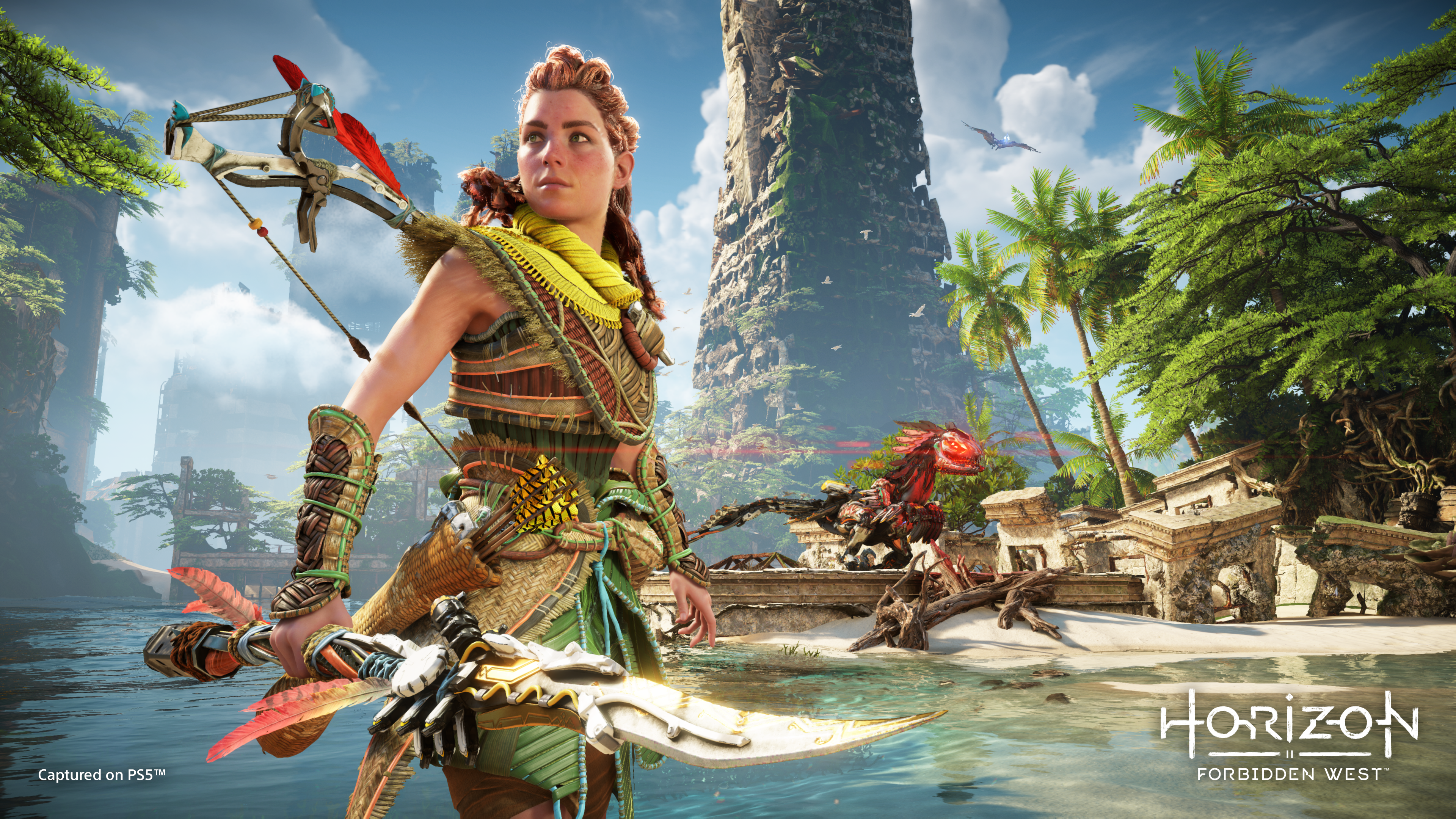 ‘With Aloy, a long period of gestation and collaboration with talented artists happened to reach the unique and iconic look we all know of her today. As character artists, the team is mainly focusing their attention to always improve the quality and fidelity of the models. So it’s the involvement of multidisciplinary team members such as narrative, concept art, rigging, animation, audio and lighting (to only name a few) mixed with our perseverance and effort which is the true magic that creates fictional characters. It allows them to become a believable and inspirational hero for everyone.”

Aloy is well known for her wavy red braids and agile warrior build, but what truly drives the design is the authenticity and practicality of placing and experiencing the characters in the world they live in.

“The team always designs her outfits with the intention to allow graceful and fluid movement over heavy and impractical costumes. We also believe that meticulously placed details are part of immersion and tell an often unspoken story. At Guerrilla, we are always eager to explore and expand the identities and cultures of our tribes. While the Utaru tribe was briefly included in Horizon Zero Dawn, they feature more heavily in Horizon Forbidden West, with an updated design, grounded fashion construction, and expanding the use of materials to create practical clothing to fit their day-to-day activities, environment and hierarchical diversity.”

More detail than ever before

The development and subsequent launch of the PlayStation 5 console has given teams at Guerrilla even more means to aim for high quality and visual benchmarks we are so passionate about, and brings an added layer of detail and authenticity to the game.

“Each generation of consoles brings extra power that lets us add even denser polygons to our character models, so we can create finer details such as peach fuzz, smooth contouring, or finer texture details and accurate materials expression, to name a few. And not only do visual aspects benefit from the new PlayStation 5 hardware — we have also increased the number of skeletal joints to bring our deformations and facial expressions to a whole new level for more credible and immersive character performance. All in all, a dream come true for both players and developers!” 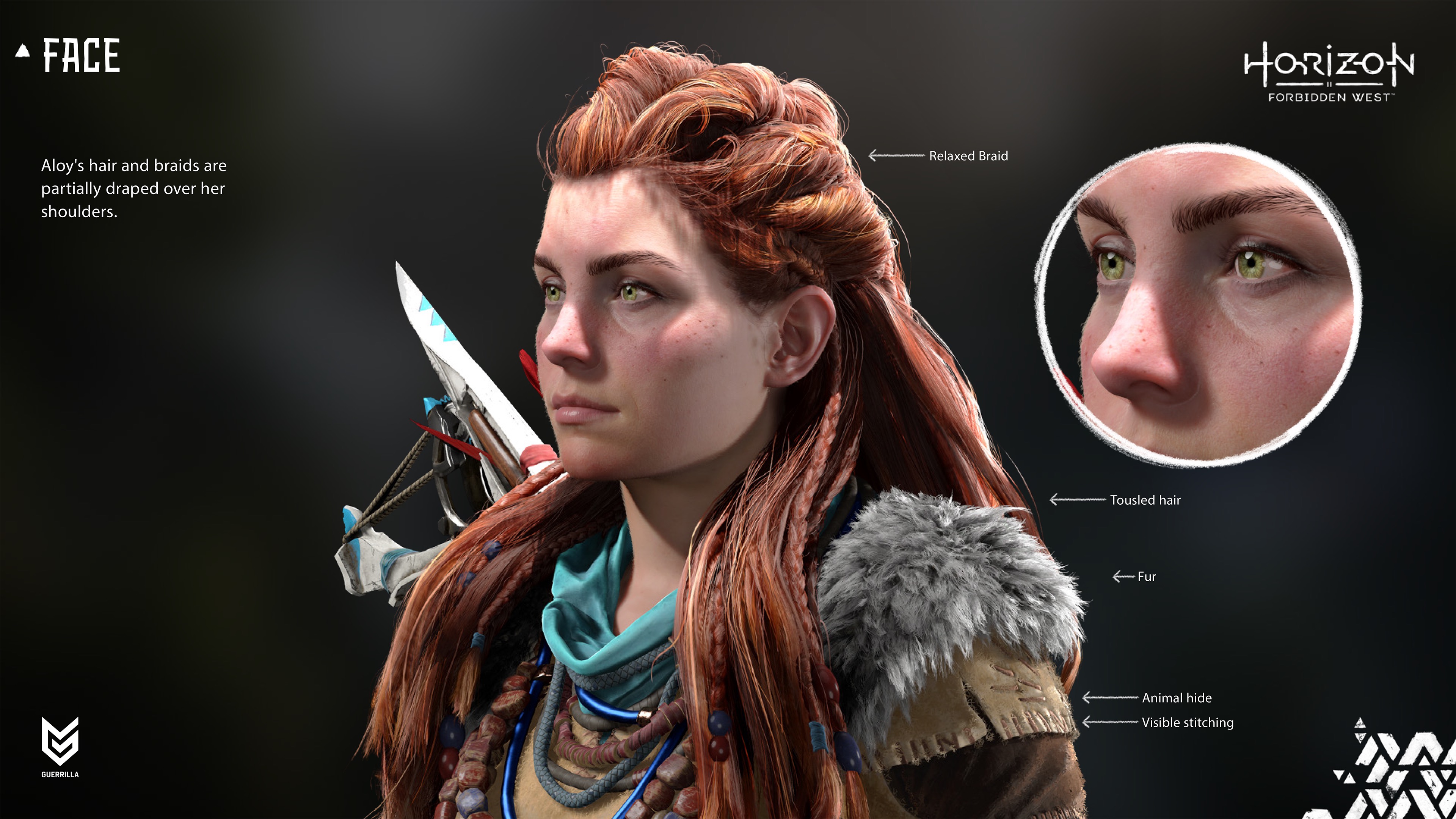 Just because the team has been pushing the boundaries on the PlayStation 5 version of Horizon Forbidden West, doesn’t mean that the PlayStation 4 version will be compromised, notes Bastien. “We actually developed and tested the game simultaneously on both PlayStation 4 and PlayStation 5, because it’s very important to us as a studio to ensure PlayStation 4 players get an equally immersive experience. With our knowledge from Horizon Zero Dawn, we knew that we still had some unexplored resources that could push the realism and quality of our character assets forward; it’s great to now be able to tap into that knowledge and experience for the sequel.’

‘From an artistic point of view, Horizon Forbidden West really stands on the shoulders of a successfully established design foundation in Horizon Zero Dawn,” Bastien continues. “The most noticeable differences and improvements for Aloy in terms of technology is the push of facial and body capture accuracy, allowing more realistic shapes and surface details on characters as well as the careful increase of polygon density to capture handmade and used outfits.”

And Horizon Forbidden West will have a range of outfits for Aloy to benefit from; similar to and perhaps familiar from the first game, outfits allow for protection against a variety of dangers that Aloy encounters and can be purchased from Merchants or found in the world. A new addition to the system is that outfits in Horizon Forbidden West have skills attached to them, so players can boost their abilities in different ways. Maximizing these skills happens through a new and improved Skill Tree, something we will tell you more about some other time…

The efforts that go into Aloy’s outfits (and those of the characters she meets during her journey) do not go unnoticed in the Horizon community. Cosplayers have been exploring these characters for years, bringing them to life in their own way and using that high level of authenticity from within the game to inform their material choices for their own costumes. To make their design process easier, Guerrilla loves to provide extensive Cosplay Guides with highly detailed renders and explanations on materials used. 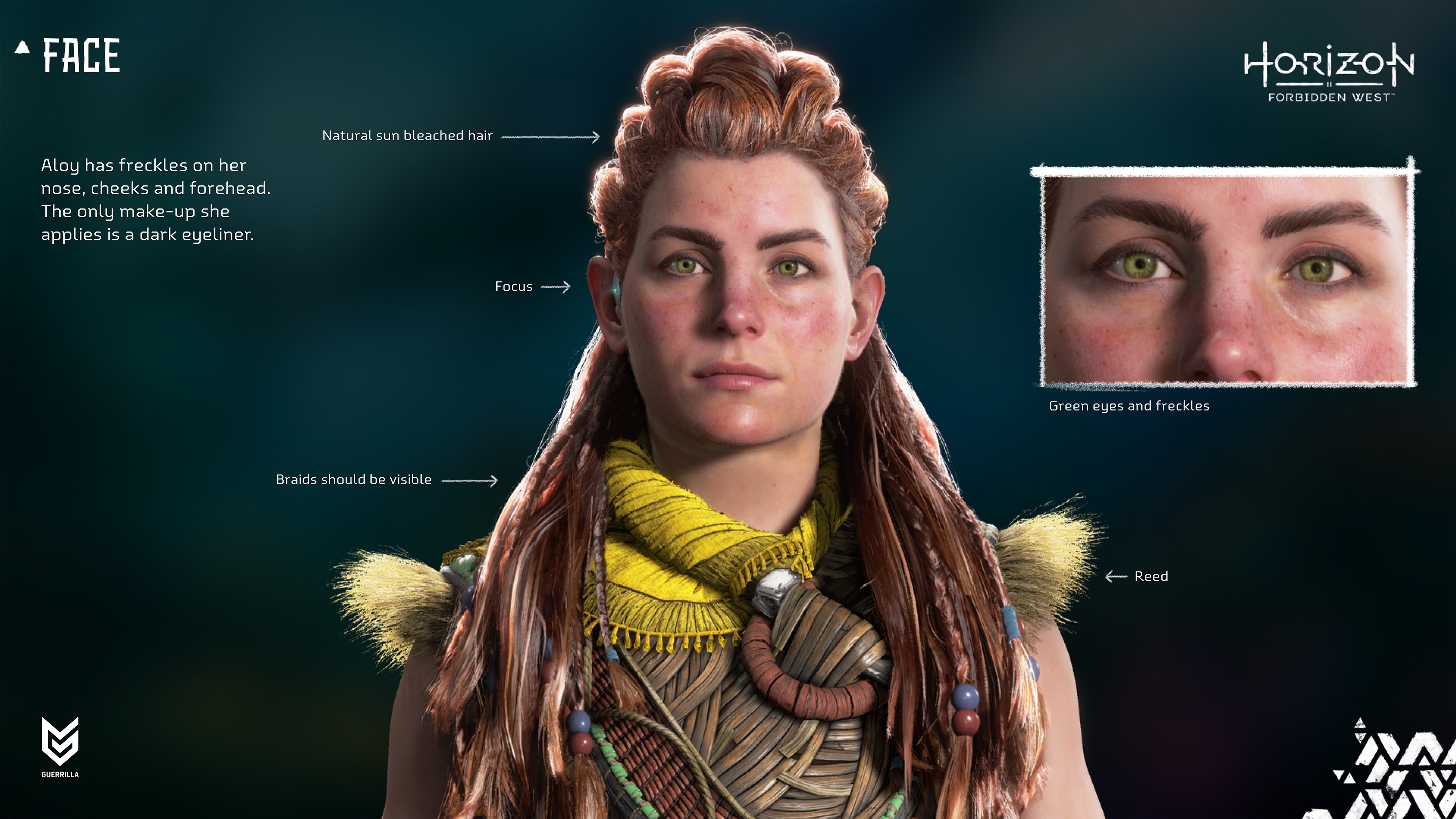 “Aloy’s Utaru Harvester outfit, which she wore in the recent gameplay trailer and is featured in our newest Cosplay Guide, is a successful cocktail of old applied rules to preserve the look and feel of Aloy, with a pinch of new exploration of the Utaru tribe. The outfit uses a wide variety of natural materials such as reed, jute, rattan, linen and leaves found within the surrounding area of Plainsong.”

Bastien hopes that, through the material library the team uses throughout development, the details and realism of tribal materials such as hide, leather, suede and wood will be useful and inspirational references. “At Guerrilla, we are always so honored to see dedicated cosplayers investing so much time and passion in the hard labor of crafting real life costumes of our digital version of Aloy. From artists to artists, we understand that such a creative project is an often uncharted and sometimes tedious path, so we are hugely excited and can’t wait to discover your newest creations after the game hits the shelves.”

Ben attests to that sentiment: “We’re excited for players to experience many of the game’s new features. Our new traversal tools. Underwater exploration. Enhanced combat. Spectacular machines. But most of all, we can’t wait to see how players react to all the characters Aloy will meet in her journey across the frontier of the Forbidden West. From old friends to new comrades and tribes, she will experience many highly personal stories… and these will affect her quite a lot. It’s safe to say she will never be the same!” For more information on Horizon Forbidden West, please visit here. We’ll be back soon with another developer blog!