Israel claims ‘right’ to strike Iran ‘at any moment’ to prevent it from obtaining nukes, FM Lapid says after meeting with Blinken 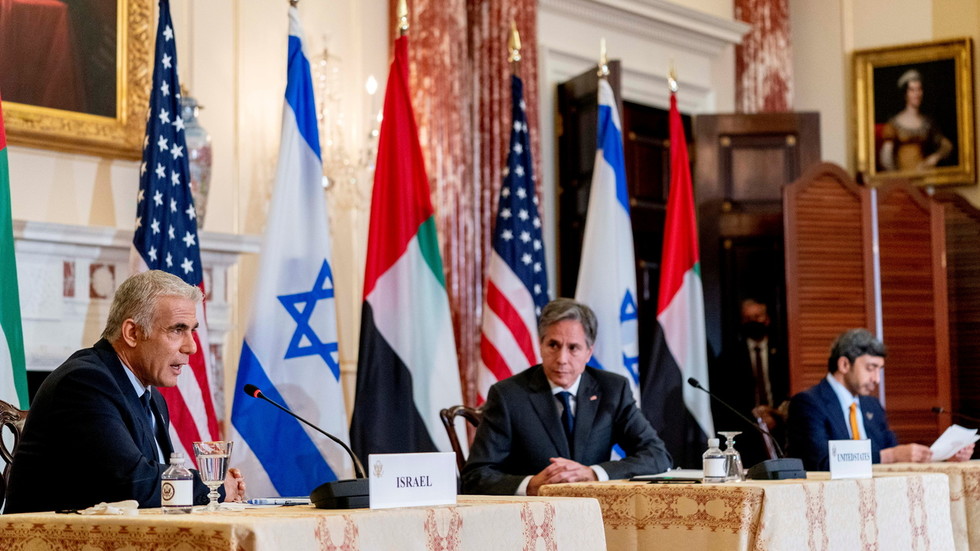 Israel reserves the right to attack Iran at any time of its choosing, under the pretext of stopping it from acquiring a nuclear weapon, Tel Aviv’s FM Yair Lapid said after meeting with his American and Emirati counterparts.

Addressing reporters after a sit-down with US Secretary of State Antony Blinken and United Arab Emirates Foreign Minister Abdullah bin Zayed in Washington on Wednesday, Lapid insisted that Tehran must not be allowed to obtain the bomb, saying the issue was at the “center” of his visit. Though Iran has long maintained it has no interest in developing nukes, Lapid vowed that Israel would stop its supposed “race to the bomb” by any means necessary.

“Israel reserves the right to act at any given moment and in any way. That is not only our right, it is also our responsibility,” he said. “Iran has publicly stated it wants to wipe us out. We have no intention of letting this happen.”

We know there are moments when nations must use force to protect the world from evil. If a terror regime is going to acquire a nuclear weapon, we must act, we must make clear that the civilized world won’t allow it. If the Iranians don’t believe the world is serious about stopping them, they’ll race to the bomb.

I just met with @SecBlinken at the @StateDept. I thanked him for hosting me and for the trilateral meeting with the United Arab Emirates. The meeting was powerful and sent a clear message to the entire region about Israel’s relations with the United States and the whole region. pic.twitter.com/b7kmhACheV

While the FM also spoke of improved ties with Arab neighbors through a series of normalization deals struck last year and noted that Israel had “turned the cold peace with Egypt and Jordan into a warm peace,” much of his prepared remarks focused on Iran. His prime reason for meeting with Blinken and bin Zayed, he said, was “the concern about Iran’s race to a nuclear capability.”

“Iran is becoming a nuclear threshold country. Every day that passes, every delay in the negotiations brings Iran closer to a nuclear bomb,” he continued. “The Iranians are clearly dragging their heels, trying to cheat the world to continue to enrich uranium, to develop their ballistic missile program.”

Though a major agreement struck between Iran and world powers in 2015 put hard limits on Tehran’s civilian nuclear energy program and created a strict safeguards system under the International Atomic Energy Agency (IAEA), ex-US President Donald Trump unilaterally withdrew from the deal in 2018, reimposing all American sanctions (and then some) in direct defiance of its terms.


In response, Iran has boosted its enrichment of uranium beyond caps set out under the agreement, arguing that it would return to those limits only when Washington held up its own commitments. It has also cited provisions of the deal which explicitly state that Iran would treat the reimposition of sanctions as “grounds to cease performing its commitments” under the agreement “in whole or in part,” saying its enhanced uranium enrichment is a legitimate reaction.

Talks to revive the nuclear pact began not long after President Joe Biden took office in January, though negotiations in Vienna have dragged on for months and appear to have made little progress. US officials have repeatedly suggested they would like a “longer and stronger” deal that covers non-nuclear issues, such as Iran’s ballistic missile program. Tehran sees that as a non-starter, however, and has demanded Washington return to the agreement already reached in 2015.

Lapid’s comments on Wednesday echoed remarks made by Israeli Prime Minister Naftali Bennett before the United Nations General Assembly late last month, where he said Iran’s weapons program is at “a critical point” and is now “one step short of weapons-grade material.” The PM reiterated warnings made by his predecessor, Benjamin Netanyahu, who has insisted Tehran is on the cusp of obtaining a bomb since the 1990s. Those predictions have so far not been borne out, with numerous IAEA inspections turning up no weapons program.

In his own appearance before the General Assembly last month, Iranian President Ebrahim Raisi denied those charges, saying that nuclear weapons “have no place in our defense doctrine” and are forbidden under religious decree from Iran’s supreme leader. He urged the United States to “stay true” to the 2015 nuclear deal, vowing to do the same should Washington drop its “illegal” sanctions and return to the agreement.

“Fifteen reports released by the IAEA have attested to the adherence of Iran to its commitments. However, the United States has not yet discharged its obligations, which is lifting sanctions,” he said.

Also on rt.com
US ‘hegemony’ has ‘failed miserably’ and sanctions amount to ‘crime against humanity,’ Iran’s president says in fiery UN address

Share
Facebook
Twitter
Pinterest
WhatsApp
Previous articleVideo: 5 People Killed in a Bow and Arrow Attack in Norway
Next articleFive people confirmed dead and more injured by Danish man armed with a bow and arrows in Norway