Kenya will impose widespread restrictions on the unvaccinated starting next month. 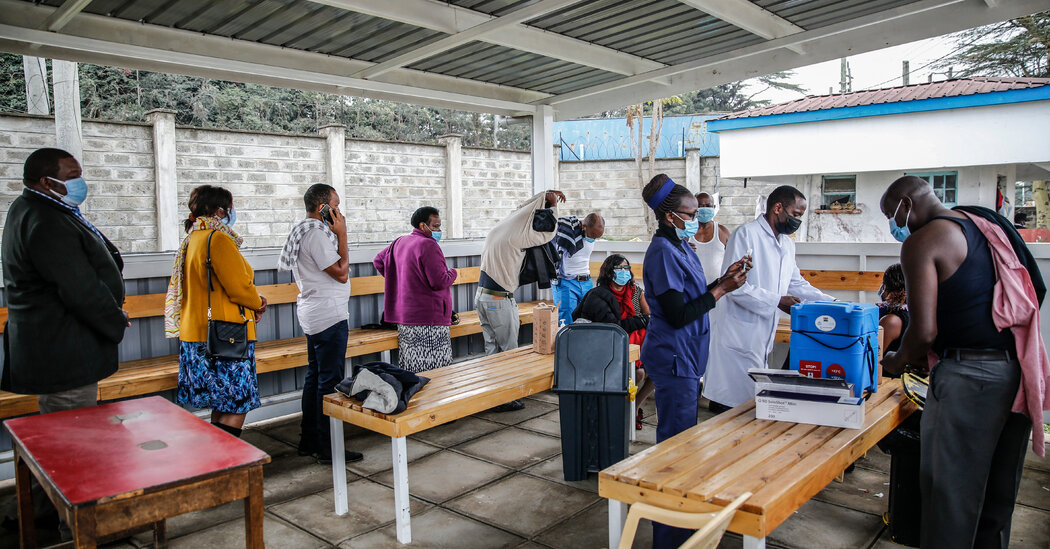 NAIROBI, Kenya — Kenya will require people to show proof of coronavirus vaccination to enter many businesses, restaurants and government offices starting next month, a major policy shift that has prompted outrage in a country where less than 5 percent of the total population is fully vaccinated.

Mutahi Kagwe, the cabinet secretary for health, said on Sunday that he was concerned about a slowdown in vaccinations and hoped the new rules would persuade more people to get their shots. With schools closing and the country heading into the festive season, he said there were concerns that people would become complacent about public health measures, including social distancing and wearing masks.

The new measure was swiftly criticized by lawyers, activists and the public, who cautioned against a stringent vaccine mandate just weeks after the lifting of a longstanding nationwide night curfew that dampened economic activity.

“It’s clearly unconstitutional,” Waikwa Wanyoike, a prominent constitutional lawyer, said of the mandate, adding that using “threats” to get more people to get inoculated will only create more apprehension about vaccines. “The requirement may be right in terms of asking as many people to be vaccinated but the approach is wrong,” he said in a phone interview.

Vaccination campaigns in Kenya have been hampered by a lack of funding. There have been few awareness campaigns. Nor are there widespread vaccination sites. The authorities at times have scrambled to access or purchase cold storage facilities needed to store the shots.

The new rules will also extend to those planning to visit hospitals, prisons, eateries, bars, national parks and any business serving 50 or more people daily. Drivers of public transportation, along with pilots and air hostesses, will be expected to always carry proof of vaccination. In addition, visitors from Europe will be required to be fully vaccinated to enter Kenya.

The new rules are the most expansive introduced in the continent yet, according to Dr. Githinji Gitahi, who serves on the governing board of the Africa Centres for Disease Control and Prevention. Zimbabwe has mandated that civil servants get shots and requires congregants at places of worship to produce proof of vaccination. Uganda requires all teachers and health care workers to be vaccinated while Namibia has flouted the idea.

Kenya has recorded over 254,700 cases and 5,328 deaths from the coronavirus. While average case rates have dropped in recent weeks, the lag in vaccinations and the spread of the more contagious Delta variant had overwhelmed the country’s health care system. Kenya hopes to vaccinate at least 30 million people before the end of 2022, but like many African countries, it has also struggled to gain access to vaccines.

The new restrictions were met with skepticism, with many lamenting its impracticality. Some pointed to the low vaccination rates among the adult population, with just 8.8 percent of them fully vaccinated. Others said the mandate could open the door to more corruption, bribery and the proliferation of fake vaccine certificates.

The State of Vaccine Mandates in the U.S.

A growing number of employers, universities and businesses are now issuing some form of a vaccine requirement. Here’s a closer look.

Critics said the government should not only make sure that vaccines are available to all but also should come up with better strategies to address misinformation and resistance to getting vaccinated.

Irungu Houghton, the executive director of Amnesty International Kenya, said the new mandate, in its current format, risked depriving people of their right to not only work but also access critical services like health and education.

“This proposal risks domesticating the global vaccine apartheid and creating those with rights and those without,” Mr. Houghton said in a statement.

No one has died with the new super mutant Omicron Covid variant despite the strain being spotted in 38 countries, the World Health...
Read more
- Advertisement -

Community care—the idea that we play an active role in one another’s well-being—is a basic tenet of wellness and healing traditions. But in...
Read more
Load more