‘Not in treaty’: Hungary’s Orban sides with Poland, rejects EU law primacy ahead of bloc’s summit 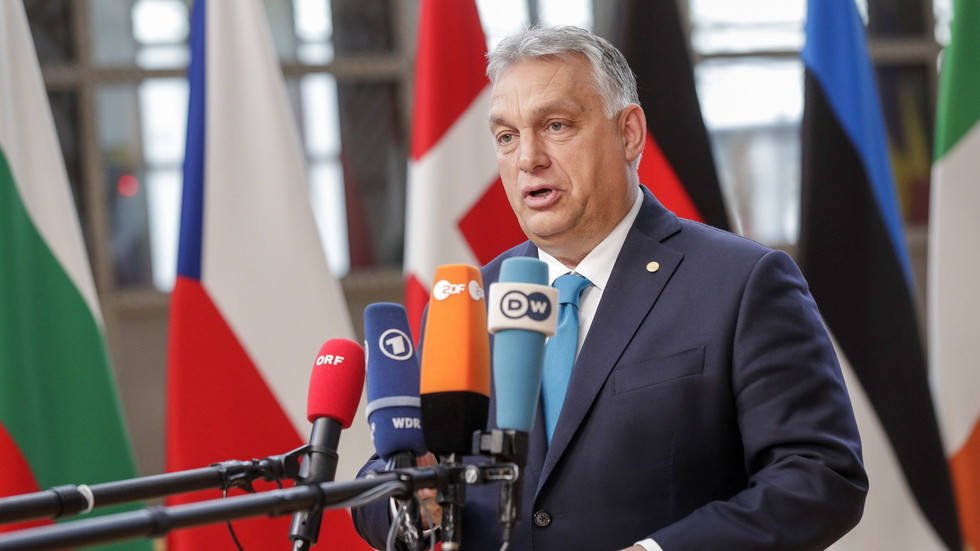 Hungarian Prime Minister Viktor Orban has once again challenged the idea of the primacy of EU law, accusing Brussels of attempts to infringe upon the rights of the national governments as he arrived at an EU summit on Thursday.

Orban dismissed the idea of imposing sanctions against Poland over its decision to make EU law subordinate to its national legislation by calling such measures ridiculous. He also praised Poland as “one of the best European countries,” adding that “there is no need for any sanctions.”

Earlier, the EU Commission head, Ursula von der Leyen, warned Warsaw it would face penalties over the move. She said Poland encroached upon the “foundations” of the union. Orban, however, believes that EU law primacy has nothing to do with any EU foundations in the first place.

Also on rt.com
Poland will be punished for challenging EU law primacy, European leader warns, as Warsaw claims Brussels is devoid of democracy


“The fact is very clear: The primacy of EU law is not in the [EU] treaty at all,” Orban told reporters in Brussels, accusing the bloc of having a thirst for power.

“What’s going on here is… that European institutions circumvent the rights of the national parliament and government, and modify the treaty without having any legitimate authority to do so,” the Hungarian prime minister said.

On Monday, Polish Prime Minister Mateusz Morawiecki expressed a similar sentiment when he warned that the EU was becoming a “centrally managed organism run by institutions deprived of democratic control.” Earlier this month, a Warsaw court ruled that areas of EU treaties are incompatible with Poland’s laws and that national laws should take precedence, backing Morawiecki’s government.

Orban had already expressed his support for Warsaw in its standoff with Brussels. In early October, he demanded the EU respect its member states’ sovereignty and said that the bloc could only take primacy in areas specifically set out in EU treaties.

The dispute has become the latest episode in a series of clashes between Poland and EU authorities. Poland’s nationalist Law and Justice party and the EU have frequently clashed over a number of issues, ranging from Poland’s self-declared LGBTQ-free zones to the situation with the rule of law in the country. The law precedence dispute was sparked amid a row over whether EU institutions could influence Warsaw’s plans for reorganizing its judiciary.

Also on rt.com
Sacrificing sovereignty is ‘the opposite’ of why Poland joined EU, but don’t expect ‘Polexit’ from it, veteran observer tells RT


It seems, however, that Warsaw and Budapest could have trouble finding other member states to agree with them. Dutch Prime Minister Mark Rutte said on Thursday that European nations have to be “tough” on Poland to make it “safeguard” the independence of its judiciary.

“The independence of the Polish judiciary is the key issue we have to discuss. It is very difficult to see how a big new fund of money could be made available to Poland when this is not settled,” he said.

Ireland’s prime minister, Michael Martin, also expressed his “extreme disappointment” with the developments in Poland and maintained that EU law is needed to protect people across the continent.

“We in Ireland are very concerned, we have good bilateral relations with Poland, but we believe the primacy of EU law and the Court of Justice is critical for the protection of citizens all across Europe,” Martin told reporters as he arrived at the summit.

Warsaw itself seems to be unrelenting. Morawiecki said on Thursday that his nation would not cave in to “blackmail” but said Poland is ready to “talk about how to resolve the current disputes in dialogue.”

He rejected the idea of “ever-expanding competencies” of EU institutions by saying that “some European institutions assume the right to decide on matters that have not been assigned to them.” Still, the prime minister once again ruled out the idea of leaving the bloc.