Peng case ‘must be investigated’ 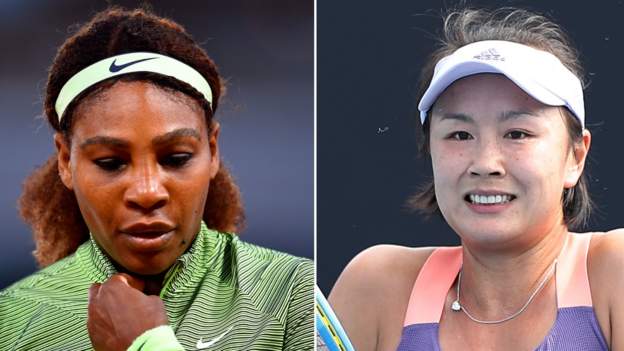 Serena Williams says the case of Chinese tennis player Peng Shuai “must be investigated” and urged people “not to stay silent” about her welfare.

Peng, 35, has not been heard from since she made sexual assault allegations against a leading Chinese government official two weeks ago.

Chinese state media has released an email attributed to Peng, but doubt has been cast about its authenticity.

“I hope she is safe and found as soon as possible,” said American Williams.

Steve Simon, chairman of the Women’s Tennis Association, has said the organisation is prepared to pull its tournaments out of China if it is not satisfied with the response to Peng’s allegation.

“We’re definitely willing to pull our business and deal with all the complications that come with it,” Simon told CNN.

“Because this is certainly, this is bigger than the business. Women need to be respected and not censored.”

On Wednesday, Simon cast doubt on the email released by Chinese state media, saying it “only raises” concerns about Peng’s safety.

The Lawn Tennis Association, the sport’s governing body in the UK, said it has “offered assistance” to the WTA to “establish the safety and wellbeing” of Peng.

Concern for Peng’s welfare has continued to grow since she said she was “forced” into a sexual relationship with former China vice-premier Zhang Gaoli.

The allegations were made in a post on Chinese social media site Weibo on 3 November and soon deleted from China’s internet.

It is the first time such a claim has been made against one of China’s senior political leaders.

Williams is one of many leading players to speak out about Peng’s welfare, as well as Britain’s Andy Murray, men’s world number one Novak Djokovic and Japan’s four-time major winner Naomi Osaka.

“I am devastated and shocked to hear about the news,” said Williams, who is a 23-time Grand Slam singles champion.

“This must be investigated and we must not stay silent.

“Sending love to her and her family during this incredibly difficult time.”

Peng is a former world number one doubles player who has won two Grand Slam titles – at Wimbledon in 2013 and the 2014 French Open, both alongside Chinese Taipei’s Hsieh Su-wei.

She also achieved a career-high singles rankings of 14 in 2011 and reached the US Open singles semi-finals in 2014.

Peng, who has not played on the WTA Tour since March 2020, acknowledged she would not be able to provide proof to back up her claims.

Her allegation is the highest-profile incident in China’s #MeToo movement.

Zhang, 75, has not responded to Peng’s claims. He served as China’s vice-premier between 2013 and 2018 and was a close ally of President Xi Jinping.

On Thursday, Chinese foreign ministry spokesman Zhao Lijian said he was “not aware of the relevant situation” when asked about it by a reporter.

People from across tennis – including past and present players, coaches and journalists – have been demanding answers about Peng’s welfare, as have other high-profile sports stars, actors and politicians.

Many have been using #WhereIsPengShuai on Twitter posts, along with a photo of her.

Serbia’s Djokovic was one of the first big-name players to discuss the issue, saying it was “shocking” when asked earlier this week.

Osaka, who has long used her platform to speak out about social issues, added her concern and said “censorship is never OK”.

On Thursday, Barcelona and former Spain footballer Gerard Pique became one of the most prominent athletes outside tennis to express his concern.

Amnesty International – the organisation which focuses on human rights – said the email purporting to be from Peng should “not be taken at face value”.

With China set to host next year’s Winter Olympics in Beijing, the International Olympic Committee was also asked for comment.

It said: “Experience shows that quiet diplomacy offers the best opportunity to find a solution for questions of such nature.”

The World Players Association said it was “deeply concerned” for Peng’s health and safety.

“The global sport community, including the International Olympic Committee, has a responsibility to exercise its significant leverage and influence to protect athletes,” it said in a statement.

“It must act quickly and decisively to ensure Peng Shuai’s safety. This means demanding that China unequivocally demonstrates that Peng Shuai is and has at all times been safe and investigates the sexual assault allegations.

“We join players around the world, the PTPA [Professional Tennis Players’ Association], WTA and human rights defenders in calling for Peng Shuai to be free from harm.”