Proud dad! Harry carries laptop bag with ‘Archie’s papa’ embossed on the side during NYC tour 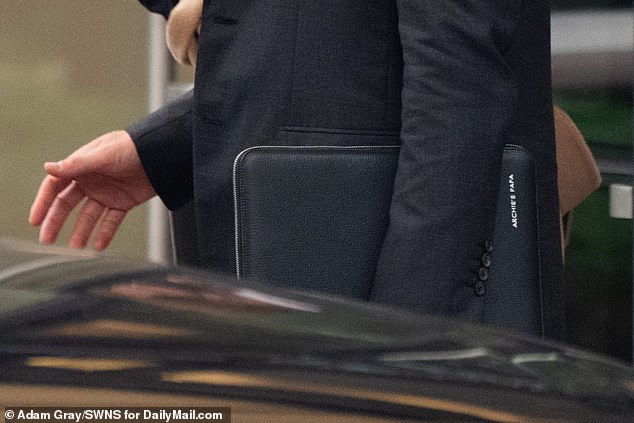 Prince Harry was pictured coming out of United Nations Plaza on Thursday holding a laptop bag with the words ‘Archie’s papa’ embossed on the side during his tour around New York City with Meghan.

The proud dad spent Wednesday night and Thursday with his wife Meghan in New York City while the kids – Archie and Lilibet – stayed back in Los Angeles.

But Harry made carry a little memento of his son with him during his highly publicized tour of New York City, which is the Sussexes’ first public trip to the Big Apple since their permanent move from England to Meghan’s native California in March 2020.

Coming out out of the United Nations building on Thursday, Prince Harry held his laptop bag with the words ‘Archie’s papa’ emblazoned on it 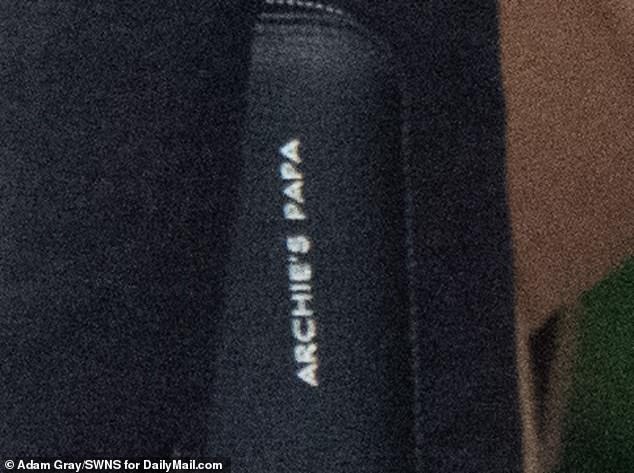 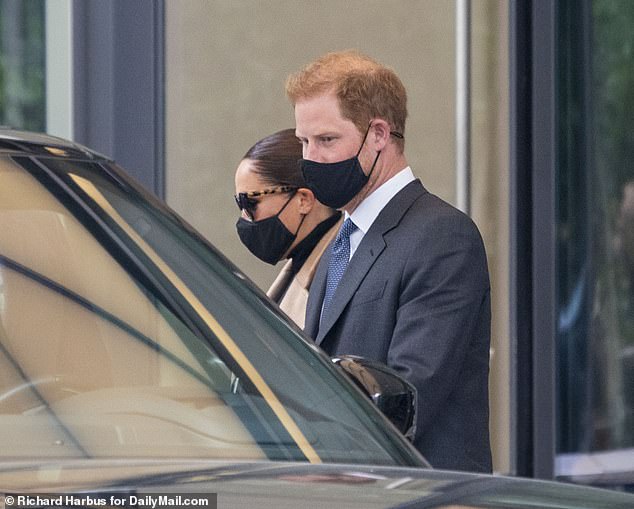 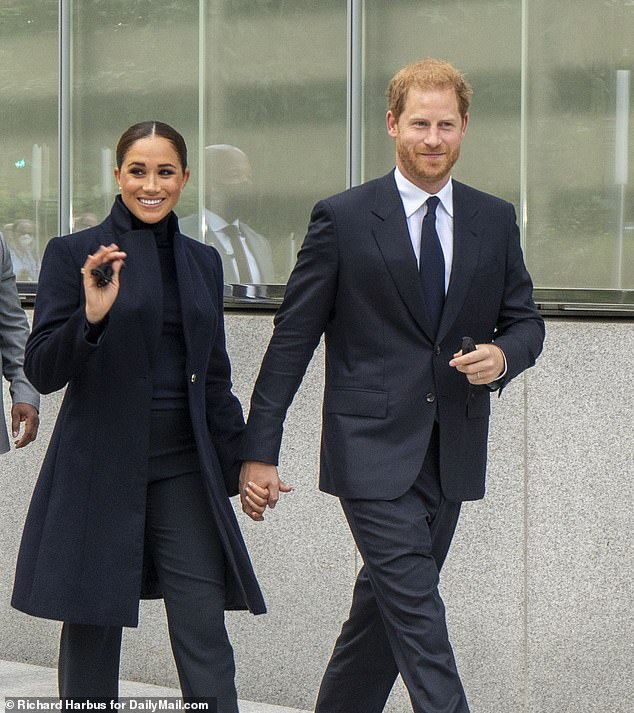 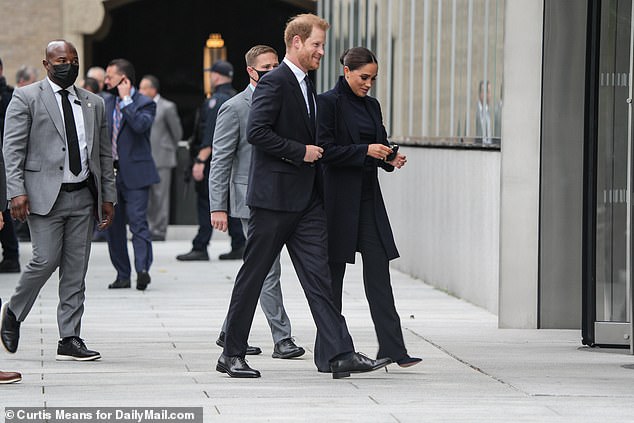 The picture was taken Thursday afternoon after their visit to United Nations for a 40-minute meeting where they had an ‘important discussion’ on COVID-19, racial justice and mental health with US Ambassador to the UN Linda Thomas-Greenfield.

Thomas-Greenfield described the meeting as ‘wonderful’ as she shared snaps of the trio chatting on sofas in a lounge area and then posing in front of UN branding.

Thursday’s UN visit was sandwiched between a somber, morning trip to the 9/11 Memorial at One World Trade Center.

Harry and Meghan spent hours the memorial before continuing with their day that included the UN visit and a trip to the World Health Organization headquarters. 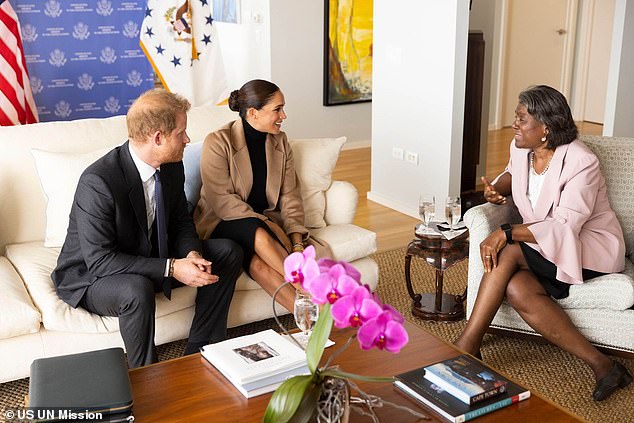 Ambassador Thomas-Greenfield (right) tweeted photos from what she described as a ‘wonderful’ visit Thursday afternoon with Prince Harry and Meghan (left side) and said they discussed COVID-19, racial justice and mental health 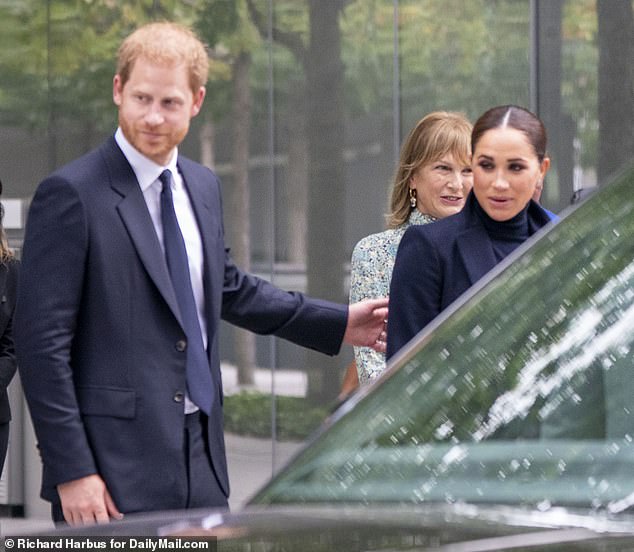 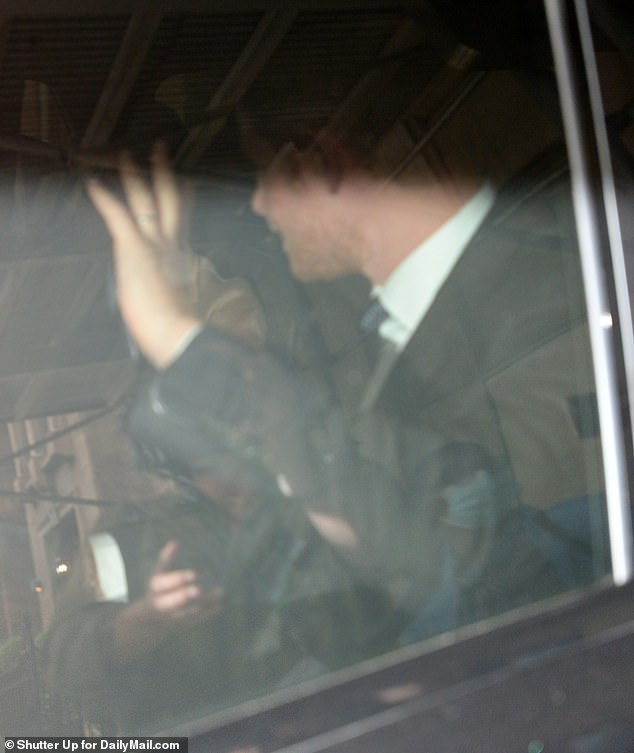 Prince Harry waves as he and his wife leave the ritzy, $1,300-a-night New York City hotel for their Thursday ventures through Manhattan

Thursday evening with a nightcap in Manhattan’s Upper East Side Bemelmans Bar in the lobby of $1,300-a-night Carlyle Hotel.

Harry was seen in DailyMail.com-exclusive photos in the corner of the banquet with two men in suits and a woman in a white blazer.

It’s unknown who they, but Meghan was noticeably absent.

Harry spoke animatedly, gesturing frequently, with a glass of white wine set before him at what appeared to be a business meeting.

The New York City trip ended in the bar for the second night in a row.

On Wednesday night, Harry and Meghan were spotted at the bar partying with Misha Noonoo and Mikey Heiss to kickstart their four-day tour of the city, exclusive pictures for MailOnline show.

It alleges how Markus Anderson, Soho Houses global membership director, provided the royal with introductions to many business and cultural elites – both in Canada and further afield. 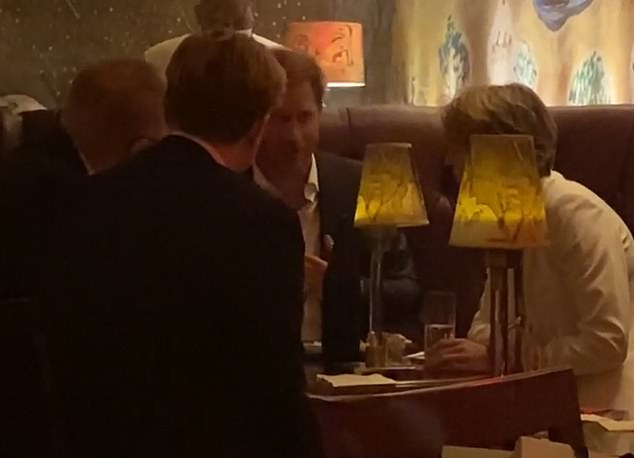 Prince Harry was spotted in the swanky NYC bar without Meghan around 5:30pm Thursday 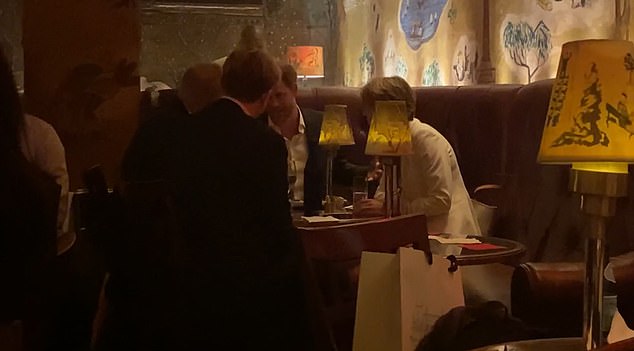 The authors wrote, ‘At a Soho House lunch in Miami, he was the one who sat the actress next to Misha, a budding fashion designer with a vivacious personality and impeccable pedigree.

‘The occasion for the December 2014 Miami trip was Art Basel, a decadent art fair that brings the internationally rich and famous for a week of parties and events of all sorts and sizes.

‘Markus invited Meghan, an art lover, to stay at the epicenter of the action, Soho Beach House, to set some sun, see some art, and have some fun.

‘A perfect place to make new friends and connections, the Soho house event saw Misha and Meghan hit it off immediately.’

The biography goes on to suggest Misha and Markus were behind Meghan and Prince Harry’s first meeting.

It’s thought the Duchess’ close pals set the pair, who are now living in the US, up on a blind date in London.

The Duke and Duchess of Sussex are far from the first big names to grace the floors of £1,300-a-night The Carlyle Hotel in New York City.

Meghan and Harry were pictured enjoying drinks at Bemelmans, the swanky 1947 piano bar that has been frequented by Bono, Mariah Carey, John Mayer and Billy Joel.

Princess Diana was known to be a regular guest at The Carlyle, known as New York’s ‘Tower of Power’ which enjoys spectacular roof top views of Central Park.

And other royals, including Prince Charles and the Duke and Duchess of Cambridge, have also stayed there in 2005 and 2014 respectively.

Designed in Art Deco style and built in 1930, today The Carlyle boasts 190 rooms and suites. 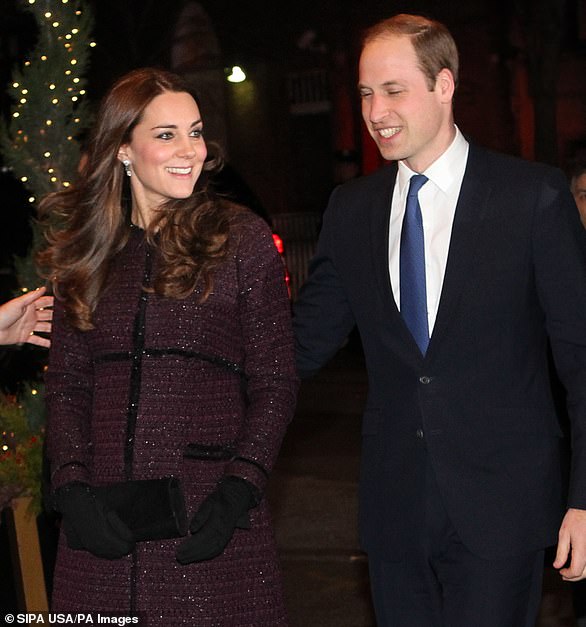 A stone’s throw away from the city’s famous Madison Avenue, The Carlyle boasts of offering its elite clientele the perfect blend of ‘discretion and grace’.

The historical landmark has seen a wealth of stars, celebrities and world leaders pass through its halls over the past 80 years.

Woody Allen was known to have played clarinet in the cafe, while guests have reported brushing shoulders with Steve Jobs, David Bowie, Michael Jackson and Mick Jagger while using the lifts.

At least six former U.S presidents called on The Carlyle as a home away from home, with insiders dubbing the luxury hotel the New York White House as a result.

President John F. Kennedy even reportedly snuck Marilyn Monroe into his 34th floor room through the service entrance and backdoors of the hotel.