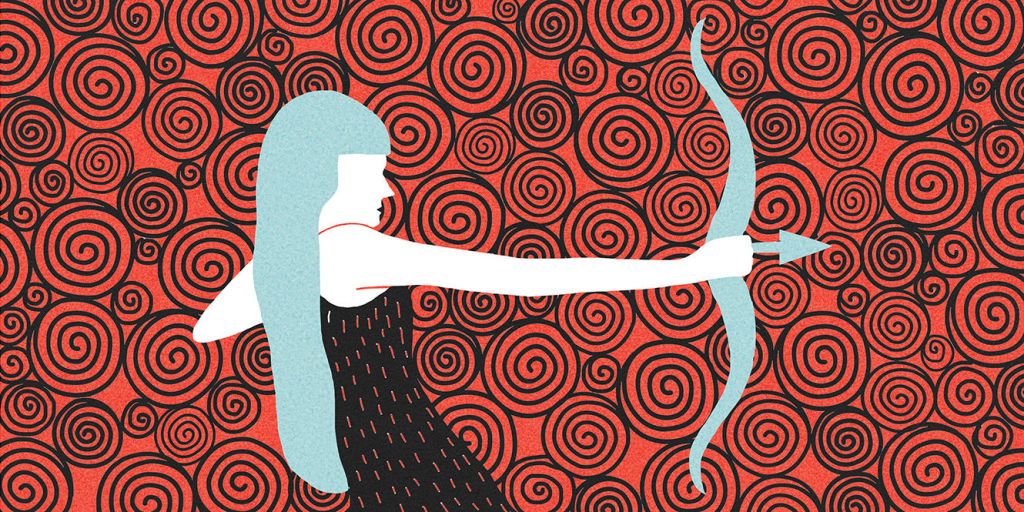 Pull back and let your magic arrows fly, Sagittarius! August is usually an action-packed month, and it makes perfect sense: The Sun is blazing through Leo and your adventurous, expansive ninth house for the first three weeks. Are you feeling the urge to travel, learn new things or shift boundaries that no longer fit so well? This no-limits energy suits your temperament (and here’s hoping CDC guidelines allow you to expand your confines). You love when anything and everything feels possible! When Virgo season kicks in later this month, you’ll want to buckle down and focus on goals and plans rather than spreading your energy in too many directions. And that’s a sound idea since by mid-August, all five of the slow-moving outer planets (Jupiter, Saturn, Uranus, Neptune AND Pluto) will be in powered-down retrograde. Progress may seem to happen a little more slowly, but that hard work and dedication will pay off! And truthfully, with go-getter Mars already in Virgo from July 29 to September 14, you could be busy making power moves all month. At the Aquarius full moon on August 22 (a rare second one), news about the future could arrive, or you may have a collaborative project to celebrate. If you’ve held off on making a decision, you could get the information you need to charge full-speed ahead (or bow out gracefully).

With the Sun in bold Leo and your ninth house of travel, exploration and inspiration until Sunday, August 22, the month kicks off with you feeling willing, ready and able to come back out and explore the wider world. Have you been aching to get out of city limits—or for any kind of novelty? Now may be the time to explore, before mask mandates and variants make that temporarily challenging again. And if you don’t feel safe traveling, you can still cultivate meaningful connections with people from afar. Take courses, work on an indie business idea, inhale a good book or a podcast that inspires personal growth (one of your favorite topics). Stretch to your full wingspan this month—think travel, adventures and expanded possibilities. As the natural ruler of this zodiac zone, you’re in your element here. Why walk when you can fly, Sagittarius?

A conservative approach is warranted in the first few days of the month. On Monday, August 2, the once-a-year Saturn-Sun opposition across your communication axis warns you to think before you speak. Mute the caustic commentary or you could hurt someone’s feelings and damage a key relationship. While you might think a friend can handle the truth, you can’t predict their current emotional state. Save the incendiary email to Drafts instead of impulsively firing it off. If you’re on the receiving end of brutal honesty, do your best to take it in stride. Make amends if needed and grow from this lesson, but no beating yourself up allowed!

You could get mired in major analysis paralysis this Friday, August 6, when the Sun in your adventurous ninth house locks into a tense square with disruptive Uranus in Taurus and your sixth house of service and systems. Travel plans could get thwarted by the million things on your to-do list or even a curveball project that HAS to be done over the weekend. You may further feed the problem by getting all in your head about it. Slow down, prioritize and don’t try to do everything at once!

An extra push to explore arrives with the year’s only Leo new moon on Thursday, August 8, which plants the seeds for growth and optimistic risk-taking between now and the Leo full moon on February 16, 2022. Close your eyes, set an intention, and prepare to spread your magic far and wide! This expansive new moon inspires you to think (and travel) beyond your current limits. A startup business or an educational endeavor could take off. Connect to far-flung followers and see what you can co-create. If you’re a media-maker or teacher, start cooking up a new project that you can launch over the coming six months.

One note of caution: Changemaker Uranus turns retrograde in resolute Taurus from August 19 until January 18, and when this happens, all five of the slow-moving outer planets will be retrograde. Translation: Avoid radical, undoable changes if possible and take your time. The side-spinning planet is reversing through your sixth house of health, fitness and organization for the rest of the year, bringing change to these areas.

Revolutionary Uranus started a seven-year trek through Taurus on March 6, 2019, sending seismic waves through all things “business as usual.” Uranus is bringing upheaval to your habits and systems, shaking up anything stagnant. Tech-savvy Uranus has also demanded that you level up your digital game, from your online presence to using helpful apps and electronics to stay organized. At the office, Uranus could have introduced chaos among employees and service providers. Stress levels may have spiked, or your schedule became unwieldy. The sixth house rules pets, and a furry critter could have demanded extra attention. Some Sagittarians found themselves in a supportive or provider role, one that introduced a lot of unexpected plot twists.

Every breakdown has been a blessing, believe it or not—but if your life feels like a puzzle with a million pieces scattered all around (and no photographic box top to follow), the retrograde will give you a chance to catch up. Uranus is the planet of rebellion and freedom, so hosting it in this orderly zone of your chart can feel paradoxical. But if you can design a way for structure to set you free—to create hacks that GIVE you more time instead of miring you in processes—you’ll tap into the gift of this transit.

On August 22, the Sun enters meticulous Virgo and your professional, ambitious tenth house, kicking off a month of career focus and success. Set goals, stick to structures and prioritize. You’ve had a whole month of blue-sky dreaming—now it’s time to sort through the bounty and see which of those ideas are worth developing. Do any have long-term potential? Map out a few rough ideas or take a decisive step forward. Let’s see where this goes!

Major news could arrive at the second Aquarius full moon of 2021, which illuminates your third house of communication. A project might finally get the go-ahead you’ve been waiting for since February. Got a message to share with the world? La luna hands you the microphone and invites you to hold court. Writing, teaching and speaking are all favored. A book or podcast could also be life-changing. Now you’ll either get the green light to move forward or a firm pass that will allow you to turn your attention elsewhere. Look back to the February 11 Aquarius new moon and July 23 full moon for clues about what could manifest.

Technology or an innovative approach could rocket your ideas even further into the limelight. With ambitious Mars in your career zone sending a golden beam to genius Uranus in your sixth house of processes and helpful people, you could totally set up a dream team or an efficient structure that turns your dreams quickly into reality.

So much for “spontaneous Sag”! With motivated Mars marching through Virgo and your future-focused tenth house all month (until September 14), you’ve got 20-20 long-range vision when it comes to love and relationships. No-string flings probably won’t be your cup of matcha now, especially with dreamy Venus in lockstep with the red planet until August 16. If you’re in that are-we-or-aren’t-we phase, the first half of the month is a good time to talk brass tacks. You want to know that there’s a ROI on everything you’re putting into this.

Career expansion will be on your mind, but so will visions of “happily ever after.” Single Sags might meet someone at work or through an industry-related function. Tag along with friends to THEIR events to double your options!

In a LTR? Sometime in the next month or so, sit down and intentionally make some shared future plans that you can both look forward to. Book a couple VIP dates where you can dress to impress and make a power-couple entrance. If you’re in a solid union, add more slowed-down sensuality and five-star upgrades to your life. Hey, you’re worth it!

For some Archers, work and responsibilities could interrupt your romantic reverie, an unfortunate but unavoidable reality. With your professional sphere highlighted, you could meet someone through career pursuits, perhaps at a conference or industry networking event. One thing’s for sure: You’ll be attracted to people who have their act together. Your motto: No romance without finance!

When Venus relocates to Libra from August 16 to September 10, the intensity around all this should lighten up a little. Go out and have fun hanging with friends or flitting between different circles. Take a break from the power couple act and do your autonomous thing. Or lean in to the more casual side of your union. Schedule group outings; host a back-from-summer-back-to-school party together. Flying solo? This sector rules technology, so don’t roll your eyes at online dating! Download a new app, upload fun new photos and write a profile that reflects your sparkling (and hilarious) personality. Ask friends to set you up with their friends. Keep it casual—but stay open to surprising clicks.

To the top! Go-getter Mars is racing through Virgo and your tenth house of professional success. This every-other-year power surge could land you a leadership role, with serious respect for your expertise and intrepid ambition. Make a bold and courageous move while Mars is here through September 14 and establish your well-deserved authority! Adding a splash of your trademark Sagittarius vision is part of the bewitching cocktail. With the Sun in Leo and your expansive ninth house until August 22, your “secret sauce” is the ability to envision possibilities long before others could conceive of them. The August 8 Leo new moon could spark one of these no-limits reveries. And by the time the August 22 Aquarius full moon activates your communication zone, you’ll be able to perfectly articulate what you see. Inspiring!