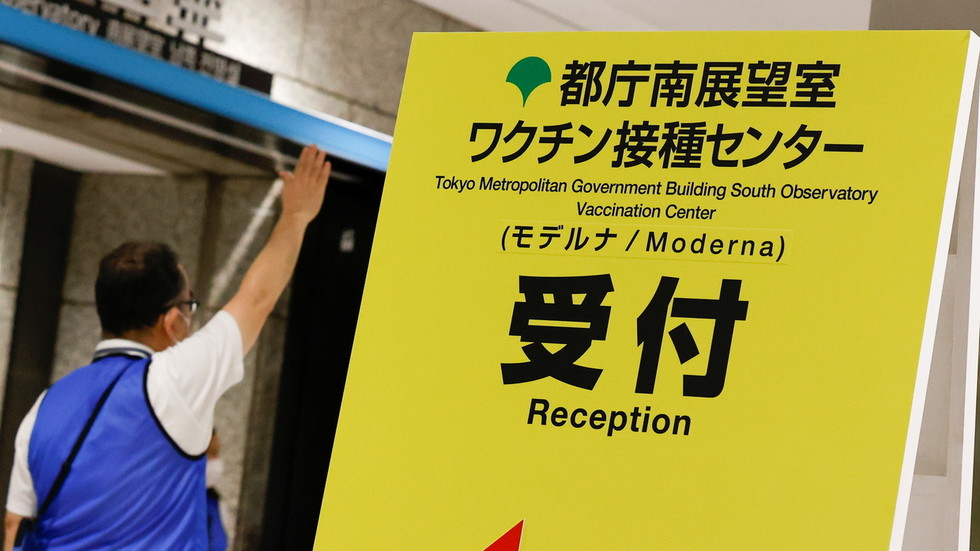 Japanese health authorities have confirmed that a third man has died, one day after receiving a second dose of Moderna Covid-19 vaccine from one of the contaminated lots that have since been recalled.

The man, 49, got his second Covid-19 jab on August 11 and was pronounced dead the following morning, local media reported, citing the Health Ministry. It is so far unclear if his death was linked to the vaccination. It is also unknown if the deceased had any underlying health conditions that might have contributed to his sudden demise. It was reported that the man was allergic to buckwheat.

Also on rt.com
3 lots of Moderna Covid vaccine doses to be recalled by Japanese distributor over stainless steel contamination


The man was inoculated with a dose that came from one of the now-suspended batches of the vaccine. About 2.6 million shots of Moderna’s Covid vaccine were recalled across Japan after foreign particles were found inside some of the vials. While authorities initially pulled some 1.63 million doses originating from three different lots, another million doses were later recalled in Okinawa and Gunma prefectures after they were also found to be contaminated.

The 49-year-old is the third person in Japan to die after receiving a dose from the tainted batches. Earlier, two men, both in their 30s, died days after taking their second Moderna shot. It was reported, however, that neither of the vials that were used to vaccinate them contained foreign particles. An investigation into their deaths is currently underway.

The substance which was initially found in several dozen unused vials and caused the batches to be recalled was later revealed to be stainless steel. Last week, Moderna’s Japanese distributor, Takeda Pharmaceutical Co., said it conducted an investigation at the plant where the contamination was thought to have happened, suggesting the metal shavings most likely came from machinery at the facility. However, the company insisted that the particles pose no danger to patients, as “stainless steel is routinely used in heart valves, joint replacements and metal sutures and staples.”

As such, it is not expected that injection of the particles… would result in increased medical risk

Despite the ongoing Moderna controversy, Japan’s Vaccination Minister Taro Kono is currently leading polls in the race to become the country’s next prime minister. His fortunes further rose after outgoing PM Yoshihide Suga announced he would step down this month amid criticism over his handling of the pandemic.