US will seek to facilitate evacuation, push for ‘inclusivity’ in 1st face-to-face talks with Taliban since pullout – media 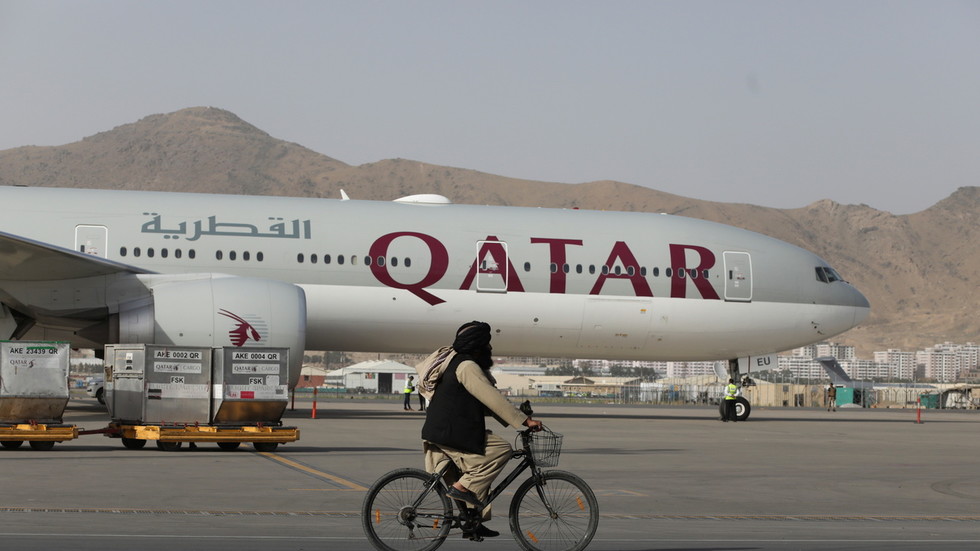 US officials are set to meet with the Taliban in Qatar over the weekend in the first in-person round of talks since the US withdrawal, and are expected to press the group to form an “inclusive government” and aid evacuations.

A delegation of US officials and senior Taliban representatives are scheduled to meet in Doha, Qatar over the weekend, a State Department spokesman confirmed to AFP on Friday.

During the meeting, the US hopes to pressure the ultra-conservative Islamist group to “respect the rights of all Afghans, including women and girls,” and “to form an inclusive governemnt with broad support,” the spokesman said.

US officials will also try to convince the Taliban to “allow humanitarian agencies free access to areas of need” in order to avert a potential “humanitarian crisis,” the spokesperson went on. While the upcoming talks will mark the first face-to-face meeting for the two parties after a chaotic US-led evacuation effort in late August, the US Department spokesman insisted that this does not mean Washington is ready to recognize the Taliban as Afghanistan’s legitimate rulers.


Rather, the Taliban must “earn” legitimacy in the eyes of the US political elites through its “own actions,” according to the spokesperson. The group now governs virtually all of Afghanistan, having ruled the nation previously in the 1990s, before the 2001 US invasion ousted it from power.

“This meeting is a continuation of the pragmatic engagements with the Taliban that we’ve had ongoing on matters of vital national interest,” a senior US administration official told Reuters.

One of the main issues on the agenda of the upcoming meeting is expected to be the evacuation of remaining US citizens stranded in the country, as well as of Afghan allies that seek to leave, an unnamed US official told the Associated Press. It is estimated that dozens of Americans and thousands of Afghans and their family members eligible for the airlift were left behind in the wake of the frantic US evacuation.

The US delegation to Doha is reportedly headed by high-ranking officials, including the State Department’s Deputy Special Representative, Tom West, as well as Sarah Charles, Assistant to the Administrator of the United States Agency for International Development (USAID). Senior officials from the current Taliban government will represent the group during the sit-down.

While the US only teased the high-level talks, the Taliban’s Doha-based spokesman and UN nominee Suhail Shaheen reported on Thursday that he already held a meeting with envoys and official representatives of multiple western nations, including the EU, Norway, Sweden, the Netherlands, Italy, Japan, South Korea, Canada, the UK and even the US itself in Doha.

1/4Today I had meeting with ambassadors and representatives of various countries including EU, Norway, Sweden, Netherlands, Italy, Japan, South Korea, Canada, UK and USA here in Doha. Other members of IEA delegation consisted of Mawlavi Matiul Haq,President of the Afghan pic.twitter.com/6aGALjKn6J

Echoing remarks made by US officials, Shaheen noted that “there is dire need for humanitarian aid in the country,” and stressed that the Taliban is “ready to engage with the International Community” after discussing the issue with the president of the Afghan Red Crescent Society.

At the meeting, which was organized by the Center for Conflict and Humanitarian Studies, Shaheen argued that Afghanistan under the Taliban should not be ostracized, but instead become an integral part of the international community.

“Isolation of Afghanistan in the past proved to be a failed policy which didn’t serve any one. No one wants that,” he said in a statement on Twitter.