Want a Shark or Splatter Art on Your Wrist? 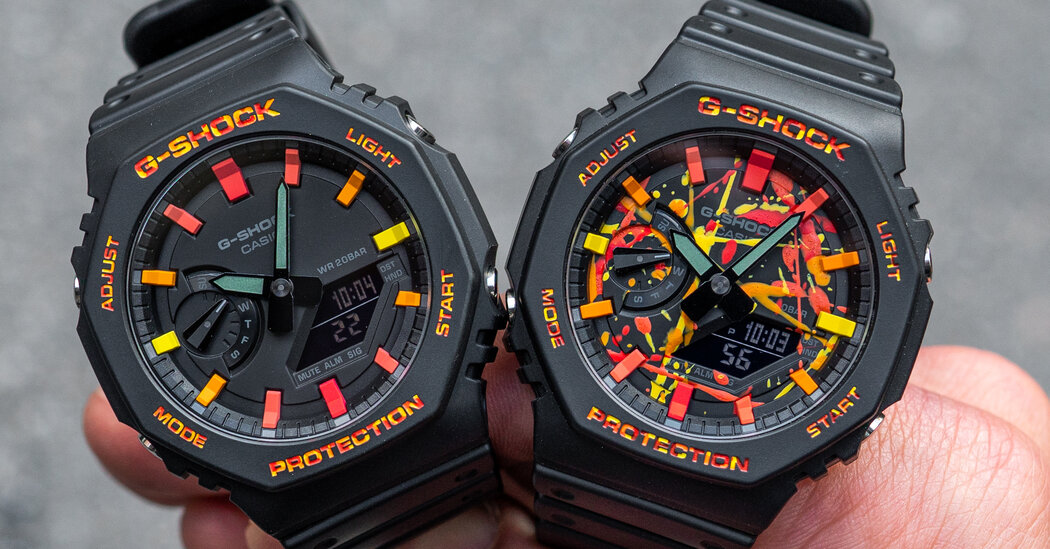 Five years ago when Chris Alexander dismantled his Seiko Turtle diver’s watch so he could paint its dial, he had no idea it would change his life.

“I posted a picture of it on Reddit, and before long, my inbox was full,” Mr. Alexander, 37, said in a phone interview. “People all over the world were keen to have something unique, different.”

Now known as The Dial Artist, Mr. Alexander said he has hand-painted more than 2,500 watch dials since then. This summer, he left his job as a university lecturer in art and design and employed an assistant to help him with the business, based in Perth, Scotland.

Mr. Alexander, who is not a watchmaker, splits his work time between private commissions and the CasiOaks collections that he customizes in partnership with the online watch accessories retailer IFL Watches.

He said he has painted watch dials from brands as diverse as Rolex, Timex and Habring, some with abstract designs inspired by artists such as Jackson Pollock and Salvador Dalí, others with world maps or sharks. He said he uses high quality ultraviolet-resistant synthetic paints and enamels, but keeps further details of his technique secret.

The CasiOaks are versions of Casio’s G-Shock Octagon Series and the name is a mash-up with the Audemars Piguet Royal Oak, which also is octagonal. (Mr. Alexander said he does not have brand licenses to customize watches, and acknowledged that his work invalidates manufacturer warranties.)

The price of a CasiOak jumps from around 100 pounds ($135) for the standard Octagon to £479 for a hand-painted piece, and £519 for a limited edition, such as the CasiOak Galaxy or Jellyfish. Commissions, such as what he called the fine-art shark he painted recently on a Christopher Ward C65, cost around £1,500 and the process can take as long as two weeks.

According to Mr. Alexander, sales have been increasing. “Towards the end of last year we released a limited edition CasioOak of 50 pieces,” he said. “They sold out within 48 hours. Then, earlier this year, we did a 200-piece limited edition, which sold out even quicker.” In the past year, he said, commissions have increased from around 20 pieces a month to as many as 500 a month, and he expected that figure to double again in 2022.

Mr. Alexander has some high-profile customers, including Kei Nishikori, the top-ranked tennis player in Japan. “We couldn’t work out why our gray watches were selling so quickly,” he said. “Without us knowing, Kei had bought one himself, and all of a sudden, he’s at Roland Garros wearing our watch. We reached out to him to say thank you, and he snapped up the Jellyfish, which he then wore to the Olympics.”

The success of The Dial Artist echoes the current trend for watch personalization. “It’s really hard to create something new in watches, which is why personalization is so popular,” said George Bamford, founder of Bamford Watch Department in London. He made his name customizing Rolexes and now has licenses to customize watches from luxury brands including Bulgari, TAG Heuer and Zenith. “What Chris does gives watch owners access to something unique, and that’s why it works,” he said.

Mr. Alexander said that, despite painting so many dials, he looks forward to doing more. “The joy of what I do is that each dial is unique,” he said. “I haven’t been bored yet and I don’t think I ever will be. It’s a passion, a love.”