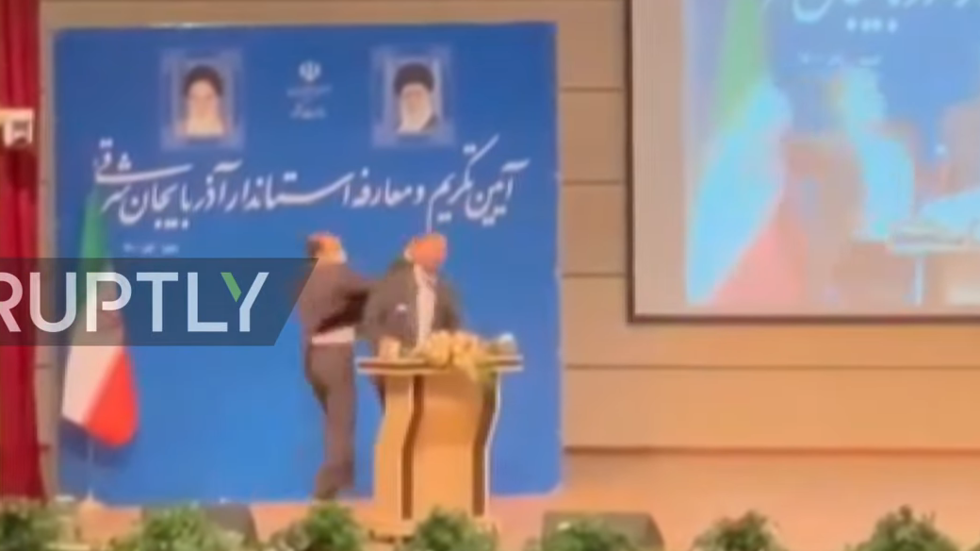 A military officer who was reportedly incensed by his wife being forced to receive her Covid-19 jab from a male has disrupted the inauguration of Iran’s newest provincial governor by walking on stage and slapping the dignitary.

Video footage of Saturday’s incident begins with the newly appointed governor of Iran’s East Azerbaijan province, Abedin Khorram, standing on stage at a podium as he prepares to give his inauguration speech. The unidentified assailant walks from the side of the stage and whacks Khorram with a powerful slap to the side of his face head.

The blow was so loud that it echoed through the auditorium. The clip shows Khorram turning toward the attacker, who confronts and pushes the governor before security forces finally rush onto the stage. Several of the security workers pull the man off the stage and into a side room.

Khorram, a former commander in Iran’s elite Islamic Revolutionary Guard Corps (IRGC), stayed calm during Saturday’s rare security breach and didn’t try to strike back. He was reportedly among 48 Iranians who were kidnapped by anti-government fighters in Syria in 2013. The Iranian nationals were later released in an exchange for more than 2,000 militants.


The new governor returned to the stage after order was restored and alluded to his time in Syria, comparing it to being attacked at his inauguration. “I do not know him, of course,” Khorram said of the assailant, “but you should know that although I did not want to say it, when I was in Syria, I would get whipped by the enemy 10 times a day and would be beaten up. They would hold a loaded gun to my head. I consider him (the attacker) on par with those enemies but forgive him.”

IRNA said the attacker was a member of the IRGC’s Ashoura Corps, which Khorram used to oversee. President Ebrahim Raisi appointed Khorram as governor of the northwestern East Azerbaijan province on October 17.