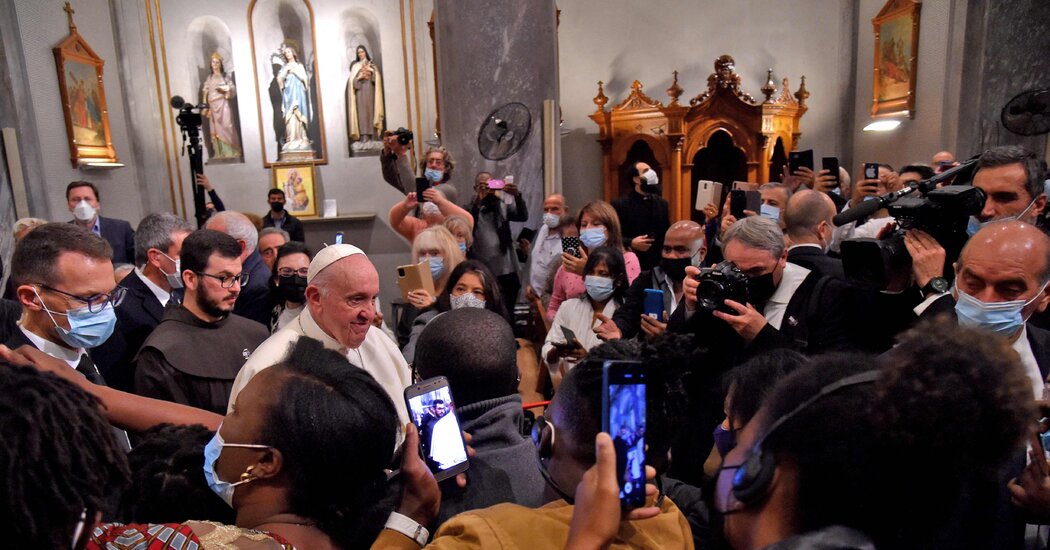 NICOSIA, Cyprus — On the Greek side of the divided island of Cyprus, Pope Francis celebrated an open-air Mass on Friday morning, urging openness to migrants seeking a better life.

As he finished, the Muslim call to prayer resounded over the arched courtyards and dusty streets in the Turkish north, across the guarded border. There, university students from Africa expressed hope that they could one day leave Cyprus’s economically struggling north and reach the European Union.

The pope’s pleas about receptiveness and compassion were helping their cause, said Chloe Samaka, 30, a political science student from Cameroon, as she walked to class in the north. “When the pope speaks, it’s not only religious, it’s political.”

In his two days in Cyprus, Francis has sought to inspire the country, a European Union member state, to embrace its history as a crossroads for different cultures, enriched by new migrants, and to be a model for the rest of Europe.

But that is a tall order on an island laden with geopolitical tension, centuries of animosity and accusations by the south that Turkey, which controls the north, is using migrants and asylum seekers as new political ammunition in a deeply entrenched conflict.

This island is in some respects a microcosm for the migration trends confronting Europe; the accusation that migrants are being used as pawns is reminiscent of last month’s tensions on the Belarus-Poland border.

And unlike Francis, and the many migrants who see him as a tireless champion, the Cypriot government has viewed the increase in migration through Turkey as an existential threat, rather than as a source of spiritual and cultural replenishment.

On Friday evening, Francis seemed to have had enough.

Speaking in a parish where the pews were filled with migrant families, several of whom the Vatican had arranged to take back to Italy, Francis put aside his prepared remarks and spoke in unusually blunt terms. “We cannot keep quiet” about a “culture of indifference,” he said.

Francis looked at the pews, filled with men and women from Africa and the Middle East, some holding crying babies. “Looking at you, I see the faces of suffering” he said, calling their plight “the story of a slavery, a universal slavery.”

His voice building with emotion, the pope listed the terrible conditions many migrants endure to get to Europe. Some were pushed back after spending their savings, and captured in migrant centers that he likened to “concentration camps, real concentration camps” where women are sold and men are tortured.

He said people who read about the Nazi death camps and Stalin’s gulag ask “how could this happen?” adding, “Brothers and sisters, it is happening now, in the neighboring coasts.”

Those who were not captured, he said, crossed the Mediterranean Sea that “has become a great cemetery.”

“The worst is that we are getting used to this,” he said with exasperation. “To get used to it is a grave disease, very grave, and there is no antibiotic to this disease.”

He added, “It’s my responsibility to help open eyes.”

The government of Cyprus has argued that it also sees migration clearly, and that it poses a threat to the national fabric.

Cyprus’s asylum seekers and migrants account for nearly 4 percent of the population, which Francis has tried to cast as a gift, but which the Greek Cypriot government clearly considers a burden. In 2020, the country’s interior minister, Nicos Nouris, lamented that percentage in a cabinet meeting and implored the European Commission to come to its aid.

The government has said a vast majority of migrants who came into Cyprus in the first 10 months of 2021 did so through the porous portions of the U.N. buffer zone. And it said that 9,270 of the 10,868 people who made the crossing did so illegally.

Migrants arrive primarily on small boats, from Turkey, Syria and most recently, Lebanon, and then smugglers and traffickers bring them to the Republic of Cyprus, according to Emilia Strovolidou, the spokeswoman in Cyprus for the U.N. refugee agency. Some, especially those from African countries, fly to northern Cyprus, on student visas provided by traffickers.

Many Turkish Cypriots on the island’s north rejected the notion that Turkey was behind the increase in migrants. “There is no government policy to push them down to Cyprus,” said Djemal Varoglu, 65, a retired local official as he sipped coffee. “They come on their own.”

Francis on Friday evening blamed political interests for aggravating the crisis, but acknowledged that, whatever forces were at play, a balance needed to be struck. Cyprus was a generous island, he said, but with such a small population it “can’t do everything” to accommodate so many asylum seekers.

The government has sought to stave off what it calls “demographic change” and has blamed migrants for socio-economic erosion and surges in crime.

In November, it said it had reached an emergency situation, though the numbers were far from daunting, with about 33,000 cases of illegal residents in the entire republic. The government appealed to the E.U. for the right to suspend asylum applications by individuals entering the country illegally.

“Because Turkey does not recognize the Republic of Cyprus,” said Marios Pelekanos, a spokesman for the Cypriot government, “we can’t use the agreement made between Turkey and the European Union to send these people back to Turkey.” He argued that “Cyprus is now facing the biggest problem in Europe.”

Just as Francis hoped to use the trip to amplify his vision of migration, the government, Mr. Pelekanos said, hoped to “take advantage of the visit of the pope” to highlight the challenges migration presents. On Thursday, with the pope sitting beside him, President Nicos Anastasiades of Cyprus detailed a long list of grievances against Turkey.

According to the U.N. commission, this year, 8,605 people applied for refugee and asylum status; another 6,483 were pending. Since 2002, more than 96,000 people have applied. Of these, only 15,333 have been accepted. The majority, according to Ms. Strovolidou, are Syrian though many come from Africa.

Asylum seekers are processed at the Pournara reception center, “where the conditions are hard because of overpopulation,” she said.

“We echo the pope’s compassionate plea for solidarity to the most marginalized people: refugees, the forcibly displaced and migrants,” she said.

But the public mood is hardening.

Saida Memedova, 19, who works in a pastry shop in the south, said she did not mind the migrants but added that many had no jobs and turned to crime. She is an asylum seeker from Azerbaijan, and said the problem between Turkey and Cyprus could be fixed only by the two countries.

At the open air Mass, Francis told the faithful that his visit had offered him a view that he called typical of the Holy Land — of those who were open to the future and “share this greater vision with those most in need.”

“I think in particular,” he said, “of the migrants in search of a better life.”