Why I Will Miss the Melbourne Star (No Joke) 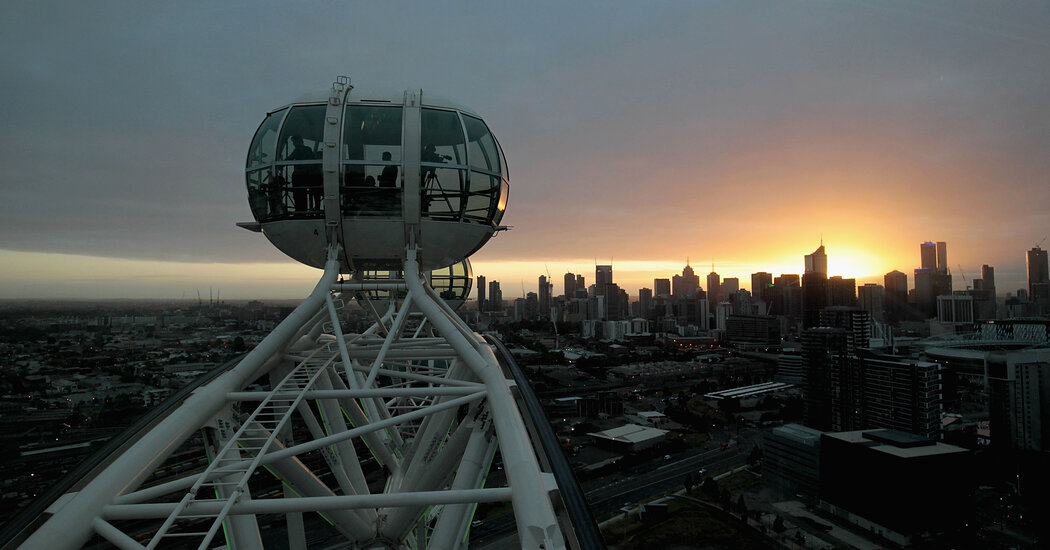 The Australia Letter is a weekly newsletter from our Australia bureau. Sign up to get it by email.

This week, Melbourne added another tally to its count of beloved institutions lost to the pandemic. This time, though, the reaction has been … slightly more mixed.

The Melbourne Star, our questionable answer to the London Eye and the Singapore Flyer, announced on Monday that it would stop lighting up the city skyline after 13 years of intermittent operation, citing the pandemic on top of existing challenges like increasing numbers of high-rises in the Docklands area.

In the days since, people have paid tribute to its misfortune-filled history, including stories of how it first opened in 2008 for a “biblical” 40 days and 40 nights before shutting down because of structural defects; how it could have reopened in January 2013 if there was “no wind, no rain for the next four months” — an unrealistic scenario for most places and laughably so for Melbourne; and the time in 2018 when passengers got trapped in it for over an hour, leading some to make use of the urinal bags in the emergency kits.

I moved to Melbourne just months after the current iteration of the Melbourne Star opened at the end of 2013, freshly rebranded from the Southern Star in an image overhaul with debatable success. Coming into the city on the SkyBus, it loomed in the distance, impressively big, gleaming white, bracketed by the high-rise buildings of the C.B.D.

When I asked around if I should go on it, the consensus was “not unless you want a view of the Costco roof and shipping containers.” So I never did.

I know one single friend who has. As an international student, he was probably closer to the wheel’s target demographic. He’d been told it was a romantic date location, especially if you go at sunset or in the evening, a sentiment that I guess is in the same general vein as the one couple who decided to have an intense and horizontal public display of affection in one of the pods, in full view of other ride-goers and CCTV cameras.

(Reports of that event aptly note that when something similar happened at the London Eye, couples were banned from riding in a pod on their own, but no such rule would be implemented here, and “in fact, the wheel’s operators are unlikely to turn anyone away, with visitor numbers already well below anticipated levels.”)

This friend, Jesse, had a somewhat different experience. When I asked him what he thought of it, he paused for a long moment before saying, “It was kind of expensive,” with the kind of underwhelming sentiment that seems to characterize many ride-goers’ feelings.

Although I never went on the Melbourne Star, it’s been in many ways the backdrop of my time living in the city.

It welcomed me home every time I left and returned. It was my commute companion before the pandemic, when I would see it massive and lit up while changing trains at North Melbourne Station, and again during the pandemic when I took the CityLink to visit my bubble buddy south of the Yarra. It was a comforting constant to look out for, and a great view when you were looking at it instead of out from it.

It was never going to be the London Eye or the Singapore Flyer — before the pandemic, London received 30 million international tourists a year and Singapore 18 million, compared to Melbourne’s three million. Still, the Melbourne Star was an icon, with all its foibles woven into the fabric of the city, Melbourne’s inside joke. Seeing the skyline lit up without it will be yet another reminder of how much the pandemic has irreversibly changed our city.

Now for this week’s stories: