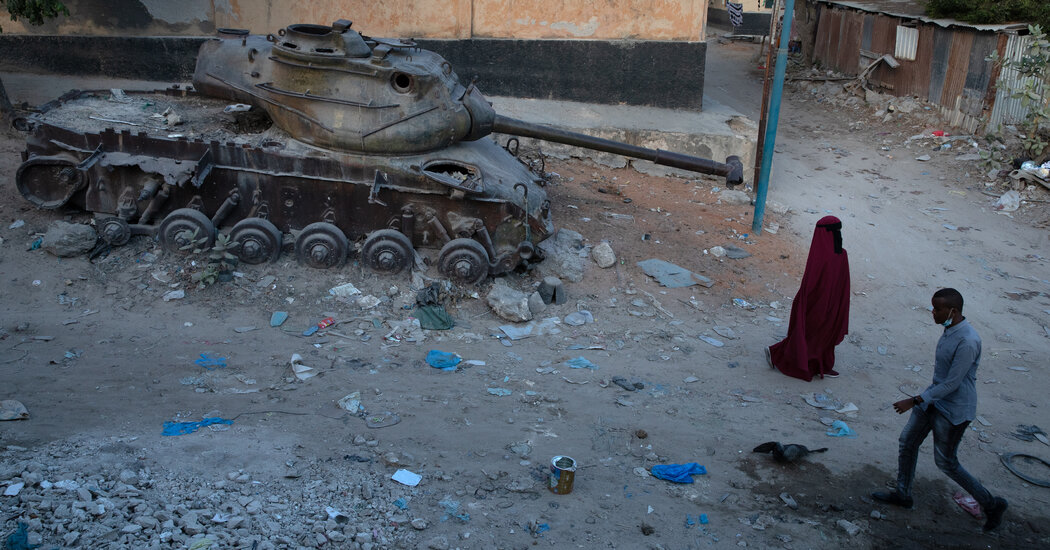 A faltering shadow war in Somalia

After the Sept. 11 terrorist attacks, the U.S. dispatched tens of thousands of troops to Afghanistan, a mission that recently ended in crushing defeat. But it turned to a different playbook in Somalia, relying on spies, Special Operations raids and drone strikes. Now, it seems, that playbook is also failing.

Despite a decade of American covert action there, the Qaeda-linked militant group Al Shabab are at their strongest in years. They roam the countryside, bomb cities and run an undercover state, complete with courts, extortion rackets and parallel taxes, that netted at least $120 million last year, by American government estimates.

The Biden administration is mulling whether to send back some of the 700 troops that Donald Trump withdrew in January. During the Trump administration, airstrikes in Somalia surged, killing several civilians and further complicating the situation in a country effectively run by insurgents.

Analysis: Without a new approach in Somalia, including a political settlement with Al Shabab, some fear that the U.S. will be trapped in another “forever war” with an inglorious end. The U.S. government has been reluctant to commit troops to the country since 18 service members died in the “Black Hawk Down” episode of 1993.

U.S. fatality: Michael Goodboe, a C.I.A. paramilitary specialist killed in an ill-fated November raid, was a rare casualty of an American way of war now under greater scrutiny than ever. He had been deployed to help hunt down a notorious bomb maker, Abdullahi Osman Mohamed, who is believed to still be at large.

The willingness of some workers in the U.S. to give up their livelihoods rather than receive a Covid-19 vaccine helps explain the country’s struggle to contain the pandemic. In New York, roughly 4 percent of 150,000 public school employees did not comply with a vaccine mandate and lost their jobs; in Massachusetts, at least 150 state police officers resigned or filed paperwork signaling plans to do so.

To public health officials, and a majority of Americans, the defiance is unreasonable and incomprehensible. Who would jeopardize financial security over a shot that reams of scientific data show is overwhelmingly safe and effective? But misinformation has been powerful, and fear and doubt have hardened into obstinacy for many vaccine refusers.

Holdouts cite different reasons for their choices: The vaccines are too new, too risky, pumped out too quickly, some said. Others cited their religious faith. Many refused in part because they objected to being forced. In the U.S., 21 percent of eligible adults have not gotten a single vaccine dose.

Context: The mandates are similar to those that have been instituted in the past for schoolchildren for diseases like polio, mumps and measles. They appear to be working: About 84 percent of adult New Yorkers have now received at least one vaccine dose.

Here are the latest updates and maps of the pandemic.

In other virus developments:

Since the early 1990s, followers of the Church of the Last Testament have practiced their faith in relative obscurity in Siberia and without government interference. But in September 2020, its leader and two aides were spirited away by Russia’s top federal prosecutorial authority. The three men are still being held in a prison, and no trial has been scheduled.

Scholars and criminal justice experts say the arrests underscore the government’s intolerance of anything that veers from the mainstream — even a small, marginal group living in the middle of the forest, led by a former police officer claiming to be God.

Followers believe their independence is what made their church a target. “We’ve created a self-sustaining society, and our freedom is dangerous for the system,” said one disciple, also a former police officer. For many of the believers, their leader’s arrest, combined with the coronavirus pandemic, is a sign that Judgment Day approaches.

Context: Since taking power at the turn of the century, Vladimir Putin, Russia’s leader, has gone to great lengths to silence critics. The state has also cracked down on nonconformist religious organizations, like Jehovah’s Witnesses, which was outlawed in 2017 and declared an “extremist” organization, on par with Islamic State militants.

If you are a woman who grew up in the 1980s or early ’90s, chances are you have a memory of coveting, wearing or living with something by the British label Laura Ashley, known for its floral chintz fashions and housewares.

While other designers were inspired by the cosmopolitan and the new, Laura Ashley looked to the Victorian past, with its sense of propriety and correspondingly modest silhouettes, and to its designer’s ultimately rather pastoral life. Decades later, the aesthetic is now inspiring a wide range of dressers and brands.

You can expect certain things from a Wes Anderson movie: vibrant color palettes, eccentric characters, symmetrical shots — and at least a few familiar faces: The director returns to the same group of actors again and again, including Bill Murray, Owen Wilson, Tilda Swinton and Anjelica Huston. (He first cast Swinton in one of his films, “Moonrise Kingdom,” after she sent him a fan letter.)

Anderson’s latest movie, “The French Dispatch,” is no different. Several of the film’s actors, including Swinton and Frances McDormand, spoke to The Times about what life is like on set — exacting during the work day, full of family-style feasts at night — and what keeps them coming back.

“Sometimes you can feel isolated when you make a film, American films especially — the stars are in their trailers,” the actress Léa Seydoux said. “With Wes, he needs a deep connection with his actors, that’s why I think he works with the same people all the time.”

Anderson added: “What I like to do is go to a place and have us all live there and become a real local sort of production, like a little theater company.”

The film itself, which follows the happenings at a fictional magazine inspired by The New Yorker, is typical of the director, who has a taste you either enjoy or don’t, like cilantro or Campari, A.O. Scott writes in a review.